Breeds of Dog with Large Ears 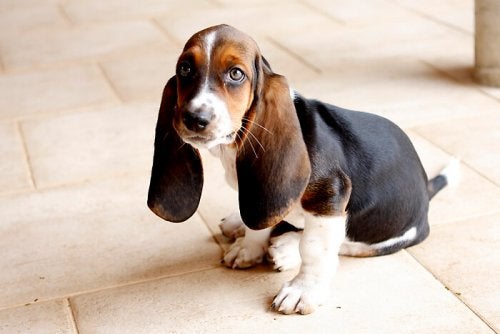 We may not particularly know why, but a lot of us really like dogs with big long ears. Maybe it’s because they make them look a little melancholic or sad, so we want to hug them immediately. Maybe it’s because their fallen ears remind us of cuddly toys we used to have as children. In this article, we’ll tell you about the breeds of dog with large ears.

What breeds of dog with large ears are there?

They’re all beautiful and have the same thing in common, their enormous ears! Some are fluffy, and some are not. There are those that hang down, and there are ears which move in time with the dog’s movements. Here are the breeds of dog with large ears:

These belong to a group known as Scent Hounds and, as well as their short legs and long body, one of their main features is the length of their ears. The Basset Hound‘s sense of smell is much more developed than other breeds. It was used from the end of the 19th Century to hunt hares, pheasants, foxes, and deer. It’s the result of a cross between a Bloodhound and an English Basset.

The Basset Hound’s large ears are very prone to infections and bad smells. This is because they practically drag along the floor. They need to be cleaned often with a damp cloth or with some cotton wool soaked in alcohol.

The American Cocker Spaniel has longer ears than the English one. The English Cocker Spaniel originated in Wales and they were bred to chase moorhens out of the bushes. They’re strong, balanced, and athletic dogs with a narrow face. Their ears are long and lobular and as a minimum tend to reach the nose. Otitis is a common illness in Cocker Spaniels. 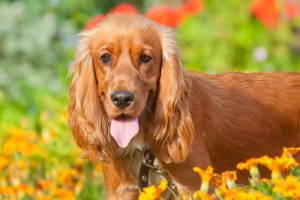 In the case of the American Cocker Spaniel (which came after the English), they also have large, woolly and droopy ears. We recommend you cut the hair on the sides of their ears to avoid infections from bacteria, parasites, or wounds.

Another breed of dog with large ears is the Beagle. They’re medium-sized pets with short legs and were bred for hunting and retrieving rabbits and hares. They originally come from England and became very popular during the reign of Elizabeth I (they were the Queen’s favourite). The most famous Beagle in the world is, without a doubt, Snoopy.

Their ears are big and long with rounded points. They reach to the tip of the nose and rest on their cheeks. This means that the ear canal does not get enough air and ends up with recurrent infections caused by the humidity.

Known in France as the Chien de Saint-Hubert, this dog belongs to the Scent Hound group. It has the most developed sense of smell of all. They can follow a scent for up to fifteen days, and as a result are used to track missing people in the mountains or countryside, for example. Their ears are very large, with smooth skin, and always hang down the sides of their head. 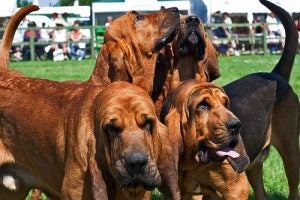 This is another of the breeds of dog with large ears which calls your attention with it’s sad expression. With its short legs and long body, this Basset is originally from France. The first example known dates from 1870. Its ears are long, have a slight corkscrew shape, and hang down the sides of its head. It’s very important to clean them regularly to avoid infections and a build-up of dirt.

These are one of the largest and most elegant dogs that exist. Although they can be a bit frightening because of their size, they’re very well-behaved and friendly. They’re known as the “Apollo” of dogs. Originally from Germany, the Great Dane is docile, faithful, and very affectionate. Its ears are positioned high but fall down either side of its head. Long ago, their ears were cut to make them more “elegant”, but fortunately this practice remains in the past.

The famous “sausage dog” with it’s extremely short legs and very long body is another one of the breeds of dog with large ears. The first example appeared in Germany in 1888 and it was bred to find burrows. It’s a very brave tracker. They can come with tough hair, long or short.