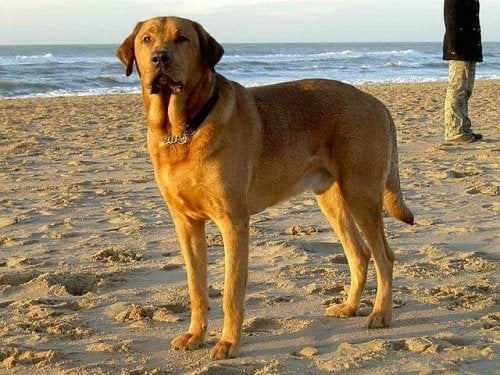 The Broholmer breed is originally from Denmark and is not usually known beyond this territory. This dog breed was about to go extinct during the twentieth century, but a group of lovers of this breed were devoted to bringing it back. Fortunately, this breed made a comeback, even though it’s not really that popular. Below, you can learn all about Broholmer dogs.

There are documents that indicate this breed is very old. There are records of the Broholmer dogs that date all the way back from the Middle Ages, however this breed become very common during the eighteenth century thanks to the Count of Broholm, which is where this breed gets its name from.

Initially, this breed was specialized in deer hunting, but ended up becoming a guard dog for houses and farms.

During World War II, this breed was on the verge of extinction, but some breeders helped them make a comeback in the 1970s. Therefore, the breeders created a standard for this breed that consists on registering new dogs, which are healthy and exemplary dogs.

The FCI has classified Broholmers as being in the second group: the molossoid, bulldog type. Nowadays, they are used as pets and guard dogs.

Broholmers are large dogs. They can measure between 55 and 70 cm up to the withers, and adults weigh around 45 and 60 kg with the males being slightly larger than the females.

They have a similar appearance to a bulldog. Their heads are wide and square, and their snouts should be the same length as the skull. Theses dogs’ necks are wide and may have loose skin on some parts.

Their lips should also droop a bit, and they should have medium-sized, triangular, folded ears. They have a strong and tough build, and the large muscles of their hind legs should stand out. Their chests are wide and deep, their tail is long and it points out like a sword when the do is resting.

On the other hand, their fur is characterized by being short and coarse. They have yellow coloring and a golden-red tone with a black mask on the face and snout. In addition, they may have white patches on the chest, paws, and the tip of the tail.

This breed tends to be calm in character and very confident. However, they are powerful dogs that need both physical and mental exercise. They are usually friendly but not enthusiastic. Since the are good watchdogs, they can be suspicious of strangers. They can become territorial with strangers or with other dogs, but they will always be friendly to their human family.

As with almost every large dog, they enjoy living in a quiet environment and they like to relax. They have a personality that’s well-suited to live inside houses or in apartments, provided that they get out of the house to get a proper amount of exercise. Therefore, these dogs can live in a house if they can go out for good walks three times a day.

It should be noted that this breed can be a challenge to train. It is not an unintelligent breed, but they need to be trained using positive reinforcement and patience. One can give amazing results if it is trained by a patient person who has experience with large dogs.

There are no studies that associate this breed with higher probabilities of suffering certain diseases. However, being such a large dog, it is prone to having several health problems that dogs over 35 kg usually get.

During visits to the veterinarian, you should check the health of their joints, because they are prone to having hip and elbow dysplasia. It’s a good idea to start giving this dog a special diet at a young age, especially one that’s good for their bones.

At the same time, this breed is also prone to heart problems. Like other large dogs, you should go to the veterinarian on a regular basis to make sure that they are in good health.

Regarding caring for their fur, this breed has a short and stiff hair that is constantly molding. They need to be brushed on a regular basis and even more during shedding seasons (spring and autumn).

In conclusion, you must remember that Broholmers are molosser dogs that are reminiscent of the bulldog and, although they are very friendly and calm enough to live in an apartment, you should make sure they have enough room at home due to their large size.

Don’t forget that they will need a few walks a day, so if you have time and a place to do one, your Broholmer will be a guard dog for your home and a quiet companion.

Source of images: Ivarr and Pleple2000