Dog Breeds That Have Troubles Dealing With The Heat

When summer comes, keep in mind that some dog breeds have problems with the heat and high temperatures. So, it's necessary to take precautions and special care of your dog. 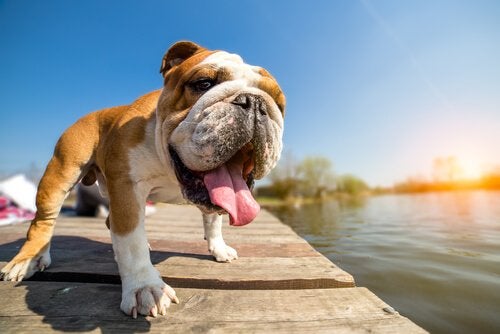 Pets are similar to people in a lot of ways. They also experience the effect of temperature changes just like humans. For example, there are some dog breeds that have troubles dealing with the heat during the summer. Continue reading this article to find out what breeds they are.

What dog breeds have troubles dealing with the heat?

Everyone knows when it’s summer, especially animals.  During this time of the year, many owners make the mistake of wanting to spend more time outside with their dogs, regardless of how they’re handling the heat.

Although some breeds are adapted to tropical climates, there are also some dogs that have troubles dealing with the heat. You need to watch them more carefully when temperatures are high: cutting their hair, putting their bed near the air conditioner and bathing them more often. Among these breeds are:

One of the problems with brachycephalic breeds is that they have difficulty breathing during the summer. The English Bulldog — in the picture above — is prone to heat strokes and they’re body unable to cool down properly.

These dogs always need to be kept in cool and airy places, in the shade and with a good amount of water available. If you’re thinking about adopting an English Bulldog, you should take this intro consdieration if you plan to bring your pet with you on summer vacation.

The main issue with these lion-like dogs with a blue tongue is the amount of hair they have. These dogs are intended for snowy and lower temperature environments. They also have a double layer of fat that instantly causes them problems in the hot weather… even when they’re shedding!

Chow Chow owners could shave them during the summer, but this can be dangerous to their health. If they’re in the sun, they won’t be able to control their body temperature and possibly burn their skin. That’s why it’s recommended to their hair and leave them in the shade with plenty of water.

This breed has the problems of the previous two breeds, which is why they are on this list. They’re a brachycephalic breed with a flat, short nose, which makes it difficult for them to breath. They also has a good amount of hair and don’t shed that much during the summer.

The best way to keep a Pekingese from getting a heat stroke is to not take them out for a walk in the middle of the day. Any sort of exercise — even moderate ones — can be lethal to their heart. You should also keep them in the shade, especially at noon.

This large dog, originally from the Swiss Alps, is another breed that has troubles dealing with the heat. This is mostly because they have a bunch of shaggy hair that was intended to shepherd sheep or goats in the snow. Therefore, when these dogs are removed from their natural snowy habitat, it can be quite troublesome for them.

All breeds that have long, dense hair, like the Bernese Mountain Dog, shouldn’t live in places with very high temperatures. Even if their hair is cut, their layer of fat won’t allow them to cool down properly.

The last dog on the list of breeds that have troubles dealing with the heat comes from Poland, but their ancestors are from Finland. Pomeranians are small in size and have a good amount of hair-including a lion-like mane. So, they prefer to sleep on cool surfaces, even in the middle of winter.

This breed also has fairly sensitive skin. Dermatitis and eczema are common among these dogs. These can be a result of being in the sun too long or their owners trying to wet them down when they’re very hot.

There are other dogs that also have troubles during the summer and being in high temperatures. Among them are Staffordshire Bull Terrier, Boxer, Pug, Shih Tzu, and the Cavalier King Charles Spaniel.