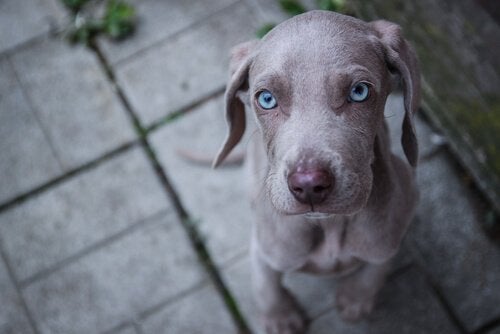 When people picture a dog with blue eyes, they automatically think about the Siberian Husky. However, there are other breeds with the same traits. In this article, you can learn what causes this condition and what medical risks these animals can get. Also, which breeds are prone to light-colored eyes.

Why are there dogs with blue eyes?

There is no doubt that people get surprised when seeing dogs with blue eyes. They are really beautiful and out of the ordinary. Basically, having lighter irises than normal can be due to four reasons:

This is the most common reason why there is dogs with blues eyes:  the Merle Gene dilutes random parts of the pigment on the nose and the iris. When this happens, dogs also have spots on their snout. There are even cases in which the animal has one iris of each color or an eye with half in one color and the other half in another. Often those who have this condition are also deaf.

Another cause of blue or light-colored eyes in dogs is inability of some cells producing pigment. They usually have white spots around the eyes and on the face, as well as a pink nose.

When a dog is affected by “Series C”, it has a condition that is known as albinism. It’s likely that a dog with this condition will have white fur, blue or light eyes and a completely pink nose.

The final reason why some dogs have blue eyes is a gene that has no relation to the color of his fur. This happens with Siberian Huskies and in some Border Collies. Dogs that live in cold areas and are used by Eskimos, can have one eye of each color regardless of the color of their fur.

What dog breeds have blue eyes?

Apart from those gene and skin conditions, the following are dog breeds that have blue eyes:

Although they may have eyes of different colors, those that have a heavenly blue tone are the most “sought for”. It is also common to find specimens with one iris of each color. In this case, there is no relationship with deafness, since it is not due to the Merle Gene. Siberian Huskies can have eye problems, cataracts, glaucoma and even become blind after a few years of age.

This is another dog that can have heavenly blue colored eyes or just plain blue eyes. They have been given the commonly known nickname of the “ghost-eyed dogs”, because their eyes have a very light tone. In some of these dogs, a single iris can have two different colors. Those with the light-eyed gene are usually have a red, bi-color or tricolor coat.

This breed can have brown or blue eyes. Border Collies with speckled fur have heterochromia (one eye of each color).

Most cases of Dalmatians with blue eyes are deaf or more likely to become deaf than those with brown eyes. The reason why this breed can have a blue toned iris is due to the Merle gene.

They are similar to a Collie and, like this breed, can inherit diseases and malformations in their eyes. In such cases, their eye color is associated with deafness.

This is one of the dogs with the most striking blue eyes because the eye color changes as they grow. When they are born, they are light, and three months later, they become turquoise or green. At approximately one year of age, they are already amber.

Finally, it is worth noting that although it is very rare, there are other dog breeds that may have blue eyes due to genetic conditions even if their parents don’t have this problem.