The mutation of a gene caused the lack of a protein that controls the development of their extremities. 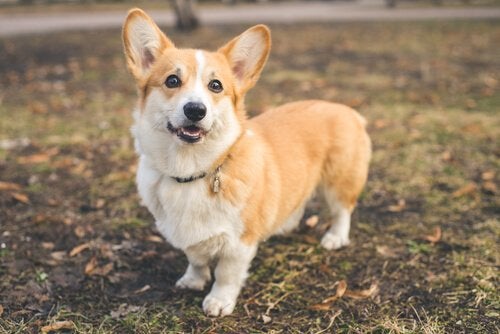 Did you know that dogs with short legs have that feature because of a genetic mutation? Interestingly enough, this change happened hundreds of years ago! That explains why today there are dog breeds that have that distinctive trait of short legs. Continue reading to find out more.

Which dog breeds have short legs?

This genetic mutation that resulted in dogs having short legs is still studied by experts scientists and veterinarians. What is known is that this gene changed around the time that dogs “separated” from wolves through evolution.

Dogs with short legs lack a certain protein that allows their limbs to grow but not their bodies, tails or heads. In certain breeds, this deficit is complemented by a calcification in the growth plates, something that is known as “disproportionate dwarfism.”

Pembroke Welsh Corgis (in the picture above) are native to Great Britain, where they were bred to herd sheep. They are descendants of pets that the Vikings brought to Wales during the ninth century. The word “corgi” means “dwarf dog” in the Celtic language.

These dogs have a strong constitution, an elongated body, large ears, and a fox-like appearance. The color of their fur comes in reddish, beige, black or brown with white patches. Unfortunately, in many cases, their tails are amputated at birth.

The dackel or dachshund is one of the most famous short-legged dogs. Their elongated bodies and tiny legs, as well as being completely brown in color, have given them the nickname “wiener” dog.

This breed is originally from Germany, where the breed became official in 1888. They have a very long tail, a long snout, large ears that droop over their faces, and black nails that catches people’s attention. They can have short or long hair. Unfortunately, they often have problems with their spines and ribs.

These are one of the better-known breeds with short legs. In fact, this peculiar characteristic of having short extremities is known as “bassetism.” These hounds are of French origin and they descended from the English bloodhound.

Another of their particularities are their long ears, which usually drag on the ground and get pretty dirty. Their bodies are robust and, although they don’t look like it, they are quite long. They are so long that they can reach certain surfaces that their short legs could make difficult… for example on kitchen countertops!

Scottish Terriers are another breed with short legs. Originally from the Scottish Highlands, they are excellent diggers and were bred to search for badgers in the mountains. Their tails are strong and long so that their owners could pull them out of the holes they dug.

Scottish Terriers have very long snouts and pointy ears. Their coats can be black, brown or gold with a “woolly” appearance and with a pronounced beard and mustache.

As for their personality, these dogs are territorial, agile, fast, determined and very independent. In addition, they are very sure of themselves, intelligent and playful. These dogs are known for their stubbornness and for being very affectionate with children.

The last dog on this list of breeds with short legs was also bred in the Scottish Highlands to hunt and to capture prey in burrows. They are small animals with furry faces, small ears and a short tail that is always sticking up. Their abundant double-layered coat is resistant to water and comes in black, gray, wheat, reddish and cream.

Cairn Terriers have a very happy personality. They are perfect as a pet, easy to train and do not bark that much.