Home » Breeds » Dogs » Everything You Need to Know About the Newfoundland

Everything You Need to Know About the Newfoundland

Thought you knew everything about this breed? Think again! 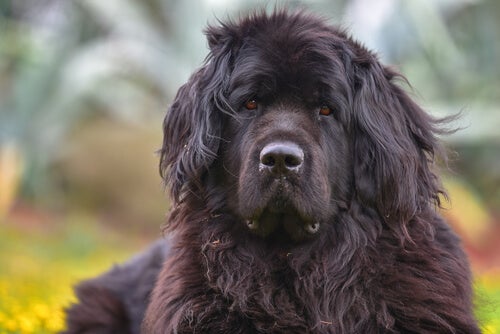 The Newfoundland is a large dog breed that is worth getting to know. They were used as work dogs by the fishermen of the place from which they get their name, a locality that nowadays belongs to Canada. Do you want to know more about this animal? Then read on!

All about the Newfoundland

This dog is related to the Saint Bernard, the Tibetan Mastiff, or the English Mastiff. It originated in Newfoundland and descends from a race called Greater Newfoundland.
By the year 1880, fishermen and explorers from Ireland and England went to the big ports in the area and talked about working dogs. There were two types: a large one with very long hair, and a medium-sized one with very short hair. The smallest breed was known as the Lesser Newfoundland, and the larger one was known as the Greater Newfoundland. Both were used to pull fishing nets and to transport fishing equipment, or even carts with fish or tools.
The breed continued to develop and prosper, until during the first and Second World War almost the all of them were extinguished. However, by 1950 the breed saw a considerable increase in numbers, which has continued until today.

A Newfoundland’s feet are webbed, and his hair is very resistant to water. This may be because attempts were made to cross them with water dogs, but they were not very successful.

Males can weigh 60 or 70 kilos and measure from 72 to 90 centimeters across, while females will not go over 55 kilos.

Normal colors are brown, black and white with black patches, although as a rule, almost all are black. There is a kind of grey color that, although it is a Newfoundland, the FCI considers it a separate breed, the Landseer.

It’s a big dog, but it has tender feelings. It is calm and docile, very gentle and excellent for carrying out work or tasks. In fact, it is known as a nanny dog. It is ideal for children, because even the Kennel Club describes it as having a sweet temperament.

Its bark is deep and imposing, so it makes an ideal watchdog if you train it thoroughly when young.

Besides being kind and sociable with people, it is also kind to other animals. If you have children or pets at home, you know that this dog will make an ideal pet. However, you’ll have to be careful with little children at first, because the Newfoundland’s size is enough to knock them down.

As with many other large dogs, hip dysplasia is an evil that will affect Newfoundlands over the years. They may also suffer from elbow dysplasia and cystinuria, a malformation in the bladder. Some have defective heart valves at birth that can cause an early and sudden death.

To care for them, we suggest that you brush their fur daily to prevent knots from forming. Buying a product that will soften it and make it easier to untangle can be a brilliant idea in this case.

Do not skimp on their food; buy quality items. His bones and organs will need all the nutrients that his body needs to be healthy, especially on the inside, and avoid the health problems that he is prone to suffer from.

Exercise is vital for his joints, muscles and organs, since these can suffer damage if a Newfoundland leads a sedentary life, because of his large size.

Have you thought of getting a Newfoundland as a pet? If so, go ahead! You will not find a more affectionate, loyal and hardworking dog.