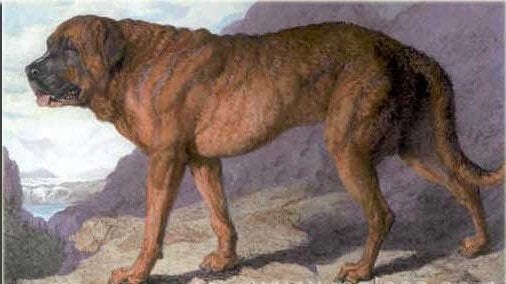 There are currently more than 800 types of dog worldwide. However, in the past there were others who, for several reasons, are not still with us today. In this article you can learn about some extinct dog breeds.

What Extinct Dog Breeds Do You Know About?

According to researchers, around 25 dog breeds no longer exist. This is due to several reasons. Find out more about some extinct dog breeds below:

This breed existed from ancient times as of the 17th Century in Central Asia and Europe. It’s the ancestor of the Spanish Bulldog, a large animal with short hair and had several different types of fur coats. They were known for being brave and were used in wars, as guard dogs, and as herding livestock. Other breeds such as the Bulldog are descended from the Alaunt.

These dogs originated from Germany and were considered to be the forefather to some of the largest breeds of dog. These dogs were Molossers, good hunters, that had short striped hair, overbite, strong muscles, and were bred by hunters. They became extinct due to miscegenation.

This is another extinct breed that lived in Europe. It was the “father” of the Saint Bernard and was used for the creation of different Mastiffs that are known today. It had a striped fur coat and during its time was the largest dog in England. Since it was mixed with the general population, crosses were quick to appear, and in the long run, this breed faded away.

The Celtic Hound lived during the era of the Irish Celts and appeared in several local legends. It’s said that it was a mix between an Irish Wolfhound, a Scottish Wolfhound, and the Greyhound. Images of the animal were recognized in 17th century paintings and jewelry.  These images depict them as hunters, guard dogs that guarded roads and crossroads, and even protected lost souls.

Originally from Argentina, this dog was the outcome of crossbreeding the English Bulldog, Bullenbeisser, Bull Terrier, and Spanish Mastiff. Its first appearance took place in the 20th Century. As its name suggests, it was used to fight to the death. Also, this breed had a high pain threshold and were very aggressive, even before mating, which caused their extinction.

One breed which derives from the Córdoba Fighting Dog is the Dogo Argentino, born in 1920.

These dogs appeared in England and had tough, short, shiny white hair. They had a very strong muscular build and weighed between 5 and 10 kg. The first example of the English White Terrier was called Silvio who was born in 1876. His owner Alfred Benjamin, took him to several dog competitions where he won prizes between 1877 and 1878.

This was an old French breed which was used for hunting over flat lands due to their flexibility and nimbleness. The Braque du Puy was born in the 19th Century in the old province of Poitou after a crossbredding a Braque with a hound. It’s believed the name comes from the Puy brothers, who crossed their dogs with African Sloughi that were brought back by soldiers. This dog was white and had orange patches.

Although this breed’s original for is extinct, recreating it consist on using other similar breeds.

Also known as the Cuban Mastiff, it was used for fighting and belonged to the Bullmastiff family. It was introduced to the Caribbean country to capture runaway slaves. After abolishing, the Dogo disappeared. This breed had a narrow head, saggy lips, floppy ears, a short tail, and was grey with a black spots.

The Northern Beagle is another extinct dog breed from Great Britain which lived up until the 19th century. Eventually, it disappeared due to crossbreeding. This means we don’t know the exact date when the last one was alive. However, it’s the ancestor of the modern Beagle, and they look very similar.