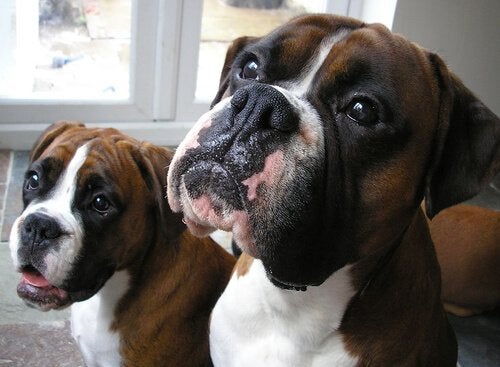 As well as the famous German Shepherd, there are many other German dog breeds that are quite popular all over the world. In total there are 37 distinct breeds that have come from this country. In this article, we’ll tell you about some of the main ones.

How many German dog breeds are there?

There are almost 40 German dog breeds, but in this article, we’re going to talk about the most well-known:

The origin of this dog dates back to the end of the 19th Century and it forms part of the Herding Group. It was developed to watch and round up sheep. Due to its intelligence, obedience, and training capability, they’ve come to be used in other professions, such as the police, search and rescue, as guide dogs, and as guard dogs. They of course make an excellent pet to have at home, but you should have a garden because of their size.

This is a Molosser-type dog and is another one of the most famous German dog breeds. It was originally used for herding livestock, and later for pulling carts loaded with meat to market. As a result, it was known as the Rottweiler Butcher’s dog. They’re medium-size with a robust body and have a good, quiet, obedient character. However, they’re very prone to suffering from hip dysplasia.

This breed was named after its creator, Karl Friedrich Louis Dobermann, who undertook the task, at the end of the 19th Century, to breed a working dog that could be a guard dog and protector. Although considered dangerous, the Dobermann can be calm and trustworthy. They make a very obedient, bold, intelligent, alert, loyal, and energetic pet.

This breed of dog from Germany is a medium-sized, molosser-type dog, created from a cross between an Old Bulldog and a Bullenbeisser. They were used in the First and Second World War to send messages, recover injured soldiers, and transport cables. They have a heavy head, pronounced jaws, large ears which are always alert, and short hair. Their hair can be tawny or with dark stripes. They’re an active, faithful, vigilant dog that requires daily exercise.

Widely known as the “sausage dog”, this is another dog of German origin and its appearance is due to a genetic mutation (bassetism). Its limbs are very short in relation to its long body. Another name for this breed of dog is the Teckel, and it appeared for the first time in 1888. It was one of the favourite dogs of the European monarchies (including Queen Victoria). They can be a little stubborn and need to be trained from when they’re a puppy.

This is one of the oldest German dog breeds which is still around (they appeared in the 15th Century). Its name is related to its typical “moustache”. It was created for hunting and chasing small prey and comes from the city of Wurtemberg. The Shnauzer is friendly, affectionate, protective, and energetic. They get on great with children and other dogs. They can bark quite a lot due to their guard dog nature. It’s important to regularly groom and cut their hair, as it’s quite thick.

Its name comes from the Grand Duke Karl August of Saxe-Weimar-Eisenach and is part of the retriever group, with short, thick, brownish or greyish hair. The Weimaraner has light-coloured eyes (blue as a puppy, then turquoise or amber later on). They’re also easy to train and behave very well as guard dogs. Furthermore, they’re obedient and affectionate. Elegant, agile on all types of terrain, energetic, and submissive at the same time, they’re an ideal dog for a family that likes outdoor activities.

This is another of the most famous German dog breeds. They’re medium-sized, with strong muscles, a long snout, and lightly folded ears.  The Pinscher has short, rough hair which can be either brown or black. They’re lively, attentive, vigilant dogs that tend not to trust strangers.

Octopuses are marine animals with eight tentacles, no shell, and feed on both fish and crustaceans and plants. In this article, we’ll tell you about some of the species of octopus…

Invertebrates
5 Species of Crabs that Will Surprise You

An animal family that consists of over 4000 species is bound to be full of surprises. These crustaceans, known for…

Birds
Characteristics and Behavior of Geese