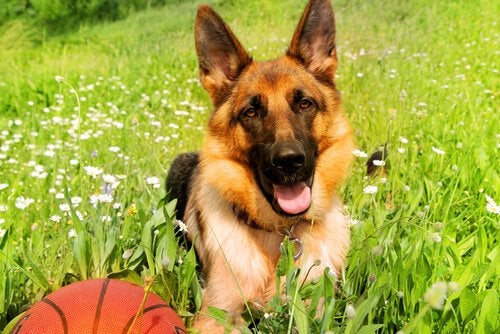 The History of German Shepherds

An army captain named Max von Stephanitz is considered the “father” of German Shepherds. They were bred to protect and herd flocks of sheep, acting like as “bodyguards” for them and defending them from wolf attacks.

In 1899, an association called the Friends of German Shepherds was formed, which also marked the breed’s date of origin. At that time, they very precisely selected specific dogs needed to improve the breed, both mentally and physically.

The first registered German Pastor was named “Jack.” He was very lively, with a grayish coat, and looked like a wolf. Von Stephanitz made sure that the German Shepherd’s descendants were working dogs and ideal for the agricultural societies of the era.

He then tried to persuade the government to make German Shepherds the official breed for law enforcement and the military.

Because of their intelligence, physical endurance and reliability, German Shepherds perform other jobs, too. For example, they also serve as seeing-eye dogs. In World War II, both the German Army and the German Police used them as tracking dogs.

German Shepherds are medium to large dogs and sport a robust appearance, a muscular body, and jaws that are stronger than most. They tend to have three types of coloring: black and tan, reddish or tan.

German Shepherds have droopy ears, but they “perk up” once they turn three months old. If they’re not completely erect by that point, (some German Shepherds have such large ears that they can’t stand up on their own) some owners tape them up to help the natural process along.

Their eyes are brown, almond-shaped, and medium-sized. Their heads are proportional to the rest of their bodies. They also have a large, typically dark-colored snout.

German Shepherds have thick fur in two layers. The outer layer is thicker and weather-resistant, while the internal one is soft and dense and helps retain heat. They shed all year long, but especially in the fall and spring. They need a light brushing daily.

As far as work-related capacities are concerned, German Shepherds are known for being guard dogs, police dogs, guide dogs, attack dogs, drug-detecting dogs, and sheep dogs. To this day, they still work as herding dogs in the United States and Great Britain.

When it comes their health, if German Shepherds are not vaccinated in a timely manner, they may contract distemper. As they get older, they often suffer from hip dysplasia and, to a lesser extent, von Willebrand disease and pancreatic insufficiency.

Over the breed’s history, just under a century and a half long now, German Shepherds and humans have gotten close. It makes sense, because they’re protective, obedient, defensive and reliable due to their breeding.

In addition, many highlight their intelligence and the natural ease they have with children in the house. However, German Shepherds are very cautious with strangers until they’re sure that their masters are okay with them.

While German Shepherds are very loyal to their humans,  they don’t need to be with them all day. They do need enough space though, due to their size and exercise needs. They are a highly active breed. A big yard to run around and play in is ideal for German Shepherds, the perfect pets for families, couples, and singles.