Have you heard of these wrinkly dogs?

Although wrinkles might be ugly to some people, their owners are probably very fond of them. 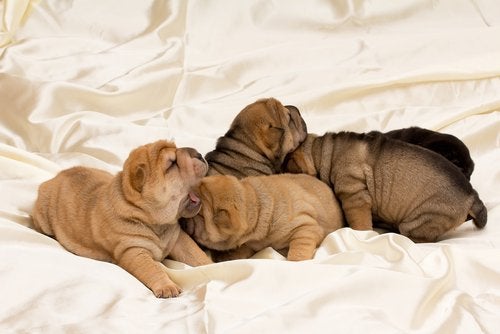 When you think about wrinkly dogs, the Shar Pei might come to mind. However, it’s not the only breed in the world that has funny, yet endearing wrinkles. Today we’ll introduce you to some of these wrinkly dogs that might be a surprise to you.

The dogs with the most amount of  wrinkles

There are several people who love wrinkly dogs, but there are others that don’t. These are the kind of dog that you either like or dislike. We love them! Don’t you? How can you deny that their wrinkles turn them into cute animals that make you want to cuddle up with them?

It’s also true that wrinkled dogs require more care than dogs with normal skin. However, the sacrifice is well worth it. Here are some of the most wrinkly dog breeds:

This is the king of wrinkly dogs. There’s no better dog to start the list off with than this one. This dog breed — that’s shown in the picture above — comes from China. There’s no explanation as to the origin of their wrinkles for now, and it’s one of the sweetest, most beautiful dogs that exist.

Although they seem to lose their wrinkles as they grow, their faces stay as cute as they were when they were puppies. Despite that fact, no other dogs have more wrinkles than this breed.

The reason why the Shar Pei breed was chosen is that they are wrinkly all over their body. However, the Bordeaux Mastiff also has many wrinkles, especially around their face and around his neck.

When they are puppies, these wrinkles are even more visible, and they remain there until adulthood. Although the dog is big and looks tough, the wrinkles give them a soft appearance. They reflect the dog’s nature perfectly because they are known for being friendly, calm, and kind.

The bloodhound’s wrinkles have gone unnoticed on many occasions, especially because their ears are very prominent and stand out more than anything else. However, their neck, face, ears, and body is covered by sagging, wrinkled skin that gives them a noble appearance.

Due to the cute appearance and calm, friendly nature, they can be great rescue or therapy dogs.

Have you ever seen a more adorable dog than this one? Although what most stands out about the pug is their small size, snub nose, and bulging eyes, their wrinkled skin makes them even more charming.

It’s a great animal to have as a pet because they are affectionate and playful. These dogs are great with kids. However, if you want to take them along while you exercise, it may not keep up with you.

Finally, there’s the French Bulldog.  This adorable breed gets the attention of everyone who sees them. Although the first things you might notice are their plump body with smooth skin and pointed ears,  you can notice that their face is full of adorable wrinkles that make them look very special.

It’s an ideal breed to have as a pet, because it’s very cheerful and fun. They are very cute as puppies. However, their snub noses can cause breathing problems.

Have you ever had one of these wrinkly dogs? If you’re thinking about adopting a new pet, keep in mind that there’s one thing they all have in common: their calm but cheerful nature.