These dogs were used for hunting the fearsome grizzly bears and other large creatures. 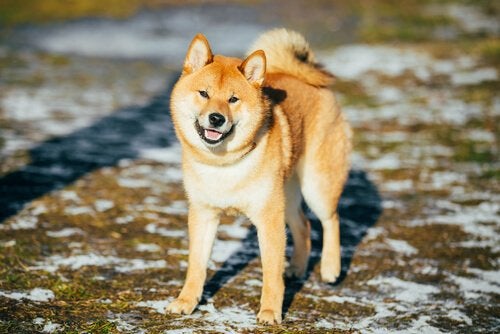 The Hokkaido is a Japanese dog breed that’s similar to the Akita Inu. They were traditionally used as hunting and guard dogs.

Origin of the Hokkaido

This breed descends from the medium-sized dogs that accompanied migrants from Honshu — the main island of Japan — to Hokkaido during the Kamakura period in the mid-12th Century.

In 1937, the breed was considered to be a “natural monument” and it was declared as part of the Japanese Heritage. Out of honor towards this breed, it was named after the region it was bred in. However, in other areas, this breed is called as the Ainu-Ken, Seta, or the Shita.

These dogs were used for hunting fearsome bears and other large animals. Plus, they are perfect mountain dogs due to their strength and resistance to low temperatures.

The Hokkaido is medium-sized dog with a strong and slim build. This breed has sexual dimorphism which was recognized in the breed standard published in 2016. According to the World Canine Organisation (WCO), males vary between 48.5 and 51.5 cm in height, and females between 45.5 and 48.5 cm.

Although there may be differences in size and weight, the WCO specifies that these dog need to proportionate in three different parts of the body in order to recognize them as an example of this breed:

When it comes to its coat, the Hokkaido has a double coat of fur. Their inner coat is thick and smooth, while the external coat is rough and straight. The fur on the tail is longer and straight. Their color is normally sesame (with a mixture of black, red, and white), striped, red, black, black and fiery red, and white.

These strong willed dogs are very noble and they’re known for being faithful to their owner. Plus, they are docile, always on the alert, bold and prudent.

Aside from being able to withstand the cold, this breed has an innate sense of direction. This means it’s easy for them to find their owners over long distances if they ever get lost.

Despite their long history as being a working dog, the Hokkaido can take on the role of a hunting and guard dog. They get along well with children if they are brought up with them since being a puppy. On the other hand, they do become a little jealous if arrives later in their lives. However, this can be taken care of with a little discipline and training.

As mentioned earlier, they’re a very strong and powerful dog when it comes to temperatures and also illnesses. Their life expectancy can easily be around 15 years as long they are kept healthy and eat a good diet.

Just as it is for any dog, this breed has certain needs that need to be taken care of, such as taking them to the vet on a regular basis. They have very strong musculature, which means they need a high protein diet and regular physical exercise.

It’s important to remember that these dog’s originate from a cold environment, so adapting them to a climate like the Mediterranean could be very difficult. Their thick skin makes it harder for them to cool off. So, this dog will be great for a person who lives in a cooler or mountainous climate.