Home » Breeds » Dogs » How to Care for a Bichon Maltese

How to Care for a Bichon Maltese

The Bichon Maltese is a breed of uncertain origin. It wasn’t recognized until 1954, in Italy. 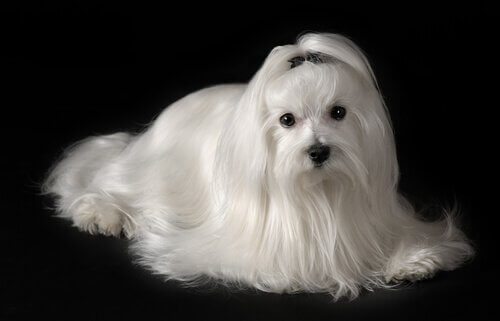 Small, elegant, and intelligent are three adjectives that describe the Bichon Maltese well. While this adorable dog with long white hair stands out as a companion, it’s also an ideal guard dog. In today’s article, you can find out how to care for a Bichon Maltese.

The curious history of the Bichon Maltese

Although its name seems to indicate it, this breed isn’t actually native to Malta. The word “Maltese” derives from a Semitic word that means “port or refuge.” And this is consistent with the fact that the ancestors of this dog breed inhabited the port areas of the central Mediterranean, where they were in charge of fighting rodents.

In any case, the origins of this breed aren’t overly certain. People say that the Phoenicians brought them to the Mediterranean from Egypt. There are also records of the existence of similar animals in ancient Rome and Greece.

The Bichon Maltese also appears in paintings of the Renaissance period where we can see them in pictures of salons as companions of aristocratic ladies of that time. The breed was recognized by the Fédération Cynologique Internationale (FCI) in 1954, under the patronage of Italy.

Meet the Bichon Maltese, a small dog with long, straight, white hair who stands out, not only for its looks, but also for its intelligence, and for being a good guard dog.

Physical description of the breed

A thin elongated body, a proud distinguished head, and long, droopy, hairy ears. These are some of the main physical characteristics of the Bichon Maltese. But there are many others too:

A dog with a great personality

The Bichon Maltese is cheerful, affectionate, sociable and easy to train; it also learns tricks quickly. But, if you don’t set clear rules, or don’t socialize it in a timely manner, it may become overly nervous. On the other hand, it doesn’t like to be left alone and loves chewy toys. Lots of them.

An ideal companion dog, it relates better to adults than to children, especially if the latter are too young to understand how to play with animals. Their rough manhandling could even hurt this kind of pet. As nice and playful as this animal is, it can’t stand having his long hair pulled, for example.

Even though it gets along well with other pets, a Bichon Maltese may feel threatened by animals that are a lot bigger than it. 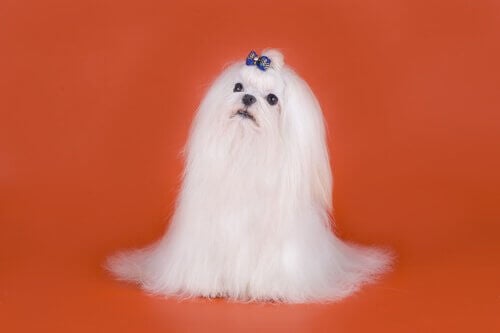 How to care for a Bichon Maltese

With a life expectancy of 12 to 15 years, it is usually a generally healthy dog. All the same, we still need to learn how to care for a Bichon Maltese. It may develop ball joint knee problems and its weight should be closely monitored to make sure it doesn’t get overweight.

Allergies to some human foods are another issue to watch out for; an adequate, nutritious diet must be provided. Also, although this breed of dog doesn’t require too much physical activity to stay healthy, it does love exercise, especially walks and games.

The long, straight coat of the Bichon Maltese requires periodic brushing with special tools to prevent knots or skin problems. Its hair may also cause irritation in his eyes and even conjunctivitis. For this reason, it’s always a good idea to keep its face clear with a bun or a ponytail.

And while it’s ideal to leave their hair long and trim the tips only, some people prefer a more pronounced cut as it gives them that typical puppy look. They should be bathed every six or eight weeks.

To avoid the appearance of brown spots around the eyes, typical of this breed, the eyes and its surrounding areas should be cleaned daily. 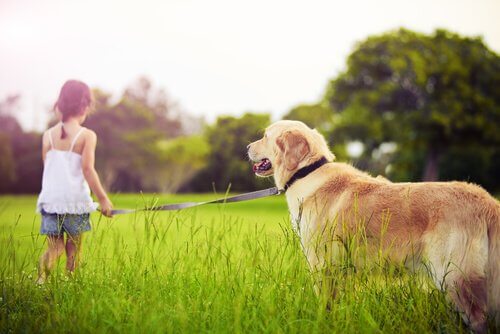 What to Do When a Child Asks for a Pet
This day is going to come sooner or later. So, we want to give you a few tips so you'll know what to do when your child asks for a pet.  Read more »
Interesting Articles