How to Get Two Dogs to Become Friends 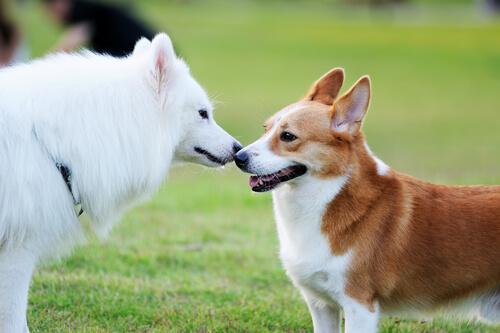 When it comes to living with a dog, the experience can be quite enjoyable if done correctly and responsibly. Therefore, you must be careful with the way in which you introduce your new pet into the home in order to prevent problems that make the living environment of two dogs become a failure.

When the owner spends a lot of time away from home, it’s best to have two dogs, for many reasons. They won’t get bored, they’ll play among themselves, they won’t feel alone, they won’t get depressed, they’ll learn to socialize, etc. At the time of introducing another dog to your home, your current dog may experience adaptation problems. It’s clear that the more socialized they are, the better they’ll assimilate the arrival of another animal.

The first step is to find out how your dog relates or can relate to others of their own species. In the second place, it’s necessary to respect a correct hierarchy among the animals in order to establish a good living environment. If the dogs are well trained, they’ll know that everyone in the household, including the children, are above them. That is, dogs have to know that they occupy the last place in the household hierarchy.

Dogs have a special capacity to perceive the moods of their owners. If they notice their owner is feeling stressed because of the arrival of a new dog, they’ll reject the new arrival. Therefore you have to show a lot of serenity and not feel guilty for believing that your pet that was already living at the home is going to feel left out because it will pick up on that feeling.

When the owner of the dog that is at home is disturbed by the arrival of a new one, it will be difficult to create a relaxed environment, which helps the family and the newcomer to adapt to their new home.

If your dogs are well socialized, they may get along well. In order for that to take place, it’s important that they have learned from puppy-hood to play with other pups, go out and share toys with other dogs. If they’re used to other animals coming to their house, lying on their bed, smelling and licking their things, drinking from their bowl and being close to their owners, then it will be a lot easier to accept the new dog at home.

There are dog breeds that are more sociable than others, and it’s necessary to gather information about them in order to choose the best one for you because there are some that don’t accept living with other animals. It’s common, but not a general rule, that the coexistence between dogs of a different sex is simpler.

Dogs are sociable by nature, and that helps a lot to welcome the new animal into the home. Genetically, they know how to live together and share space. Let’s not forget that they are the descendants of wolves, and sometimes wolves live in packs of more than fifty members.

Problems of coexistence between two dogs

When the owners give more priority to one more than the other and don’t respect the hierarchy that there is between the dogs, that’s problems coexistence start to appear. Females, in this sense, are a bit more problematic to integrate well, and conflicts often arise between them as they adapt.

Competition is a normal behavior. Dogs often compete, in their own way, to win the love of the owners. Almost always the owners will have to stop those fights. In those cases, there is no need to intervene or the competition will continue without resolution. It’s better to let one of them be the winner, and that fight will no longer be repeated or if it happens on occasions, it won’t be so intense.

It’s a mistake to consider that there must be equality among the dogs. In the case of serious fights, it’s best to consult with a specialist. However, this doesn’t usually happen. It’s a mere declaration of intentions, a threat between them, showing the teeth, becoming stronger, etc. In no case should yo show more preference for one of the two.

A very curious detail is to allow them both to enter the home at once, that way no one will feel more dominant.