How to Recognize Deafness in Dogs

Partial deafness in dogs can be difficult to detect because sometimes dogs are able to hear, but they choose to ignore their owner. 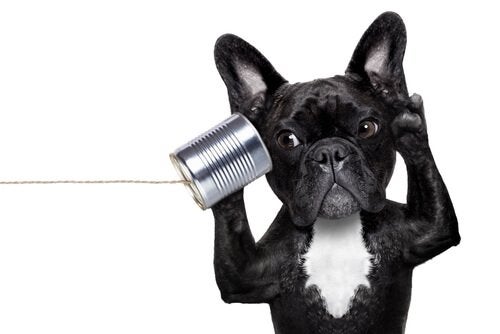 Although deafness in dogs usually takes place in older dogs, young dogs can have it too. This may be because of a congenital or hereditary condition. It’s difficult to actually tell if your dog is deaf, but the following tips can certainly help you recognize if your pet is deaf, and advice you what to do to help them out.

Deafness in dogs: watch your pet

Sometimes the dog isn’t completely deaf, which makes it more difficult to diagnose the problem. Of course, if your pet doesn’t respond when you call, talk to them or not react to anything, then most likely they’re deaf.  But if they aren’t completely deaf, things can get complicated.

This could result in your dog sometimes listening to you, and sometimes not. Or perhaps, depending on how far away they are, could influence how clear they hear you. In order to recognize your dog’s hearing problems — if they have any — you’ll need to do more than just observe them: you’ll have to test their attention.

To do this type of test, you can use an object that you have in your hand or one that your pet likes. For example, a set of keys or a tennis ball. Go up to them while they’re relaxing. Without him noticing, jangle the keys to see if they react.

While they are sleeping, you could try clapping your hands near them to see how they react. You can also do this with a squeaky toy or by dropping something on the floor.

Deafness in dogs: at the vet’s office

If you have done these tests, and you’ve realized your dog may have a hearing problem, you should take them to the vet’s office.  He/she will submit your dog to the BAER test. These tests will show how your dog’s brain responds to sounds.

The test is done by using electrodes that are placed by the head and ears of the dog. This will allow the vet to not only determine if there’s an auditory problem but also to what degree and what area is affected.

This test recognizes the intensity with which the sound reaches the dog, as well as the response, even if it’s minimal. There are other tests that veterinary colleges recognize, but they’re not as accurate as BAER. However, there are professionals who choose to use them instead: DPOAEs, OAEs or cochlear microphones.

These tests can also diagnose the dog’s deafness. However, they cannot tell the intensity or which area is being affected. Even though they don’t provide a lot of details, their diagnosis is very reliable.

What are the most common causes of deafness in dogs

There are several causes of deafness in dogs. As mentioned earlier, when a dog is young, the problem can be congenital, hereditary or is the outcome from a trauma. As for older dogs, the causes are:

Otitis that is not properly cared for, or bone loss due to old age, can cause complete loss of hearing in dogs. You’ll want to know if you can do anything to help this. However, the truth is there isn’t much you can do, just like we can’t stop the effects of old age in ourselves.

Even so, you’ll want to keep their ears clean to prevent otitis and other infections that could lead to deafness. Giving them supplements on a regular basis throughout their lives will strengthen their bones, but only time will tell how much your dog’s aging will affect him.

Deafness in dogs is more common than you may think. So, before it becomes a reality for your dog, why not take some measures to help prevent it?