This dog breed is known for its "rastafarian" coat, which looks to some like a mop. Its luscious mane protects this shepherd and guard dog from potential wolf bites while guarding the flock. 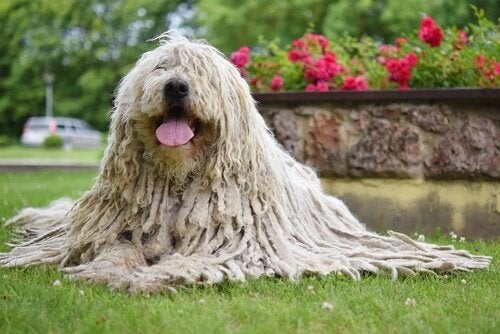 Do you like dogs with dreadlocks? It may seem impossible to brush these so called “Rastafarian” dogs. In today’s article, you can get to know  a very special breed: the Komondor. Continue reading if you’re interested in learning more about this beautiful creature.

As mentioned earlier, the Komondor is recognized by its unusual fur. It gets confused with several water dog breeds, but they’re different. The Komondor is a Shepherd and guard dog, and its fur is what makes them so noticeable. Predators confuse them for sheep, so they can catch them by surprise.

There are several theories about this dog’s origin. Some believe it first appeared in 896, in Hungary when the tribes of Prince Arpad settled into the Hungarian Steppe.

Some people even believe that Mongols were the ones who brought the Komondor to Hungary after they conquered it during the thirteenth century. Today, no one is sure, but what is known about the Komondor is that it’s a very efficient sheep dog and guard dog.

This is a large dog breed, with a royal, robust make-up. Their legs are straight, short and thick. The back legs are significantly larger than the front, which is helpful when attacking intruders. They attack intruders by standing up on their hind legs and scratching them with their front legs.

Their “dreadlocked” fur is white, long, and thick. Some call Komondors “mop dogs.” Even though there are a few with beige or sand-colored coats, in actually these colors were acquired over time. The only accepted and official color for this breed is white.

A Komondor’s fur seems to help them avoid wolf bites when they protect their flock. It’s definitely too difficult to bite through this dog’s tangled fur.

Like most sheep dogs, Komondors are calm, peaceful, and patient animals. However, if they sense danger, they’ll transform into a great defender. They will gladly give their lives for their family or flock.

Their legs allow them to jump over any predator that tries to attack, including wolves and bears. They are patient and gentle with kids, and very affectionate towards their human family members.

However, they’re known for being distrustful of strangers. If the strangers proves that he/she has good intentions, the Komondor will soon accept them.

They don’t have the same diseases as other well-known breeds. Rather, they could be affected by illnesses that are unique to big dogs, such as hip dysplasia or gastric torsion.

However, this breeds coat requires special attention. It’s important to check behind and inside the fur for any ticks and other parasites. Their eyes and ears require cleanings on a daily basis, and it’s recommended to take your Komondor to the groomers at least once a month for hygiene checkups and professional brushing.

So, what do you think about getting yourself a Komondor. Probably you can get one today!