Pug Dog Breed, the Best Dog for You

The pug dog breed is known for being affectionate and always wanting to play. Keep reading to see if this breed is the right fit for you. 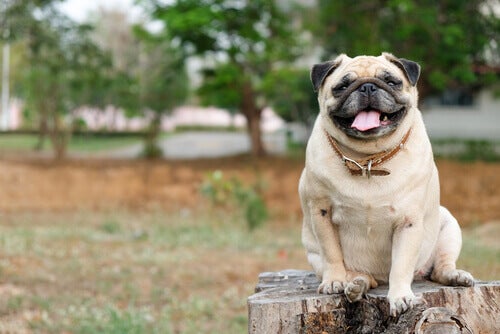 Are you looking for a dog breed that fits your needs and preferences? Choosing a furry friend to be with you for so many years isn’t an easy task. So, you have to pay close attention to the dog’s characteristics. In this article, we’ll tell you all about the pug dog breed, little dogs who are full of fun and love.

Although this breed was first found in China, it became famous in the United Kingdom. It takes its name from the word “pug”, which is used to describe loving and playful beings.

The term “Carlino” (another name for them) comes from the fact that there was an Italian actor called “Carlin” who played Harlequin in the Parisian theater. This character’s black mask looked similar to the face of a pug.

The pug dog breed’s direct relatives are larger dogs like the Pekingese (both breeds are favorites in Tibetan monasteries). People believe that Dutch merchants brought them from the East to Europe. Then, from there, the breed spread to mainly England and France.

Since they first arrived in Europe, pugs have been considered a “luxury” pet. That’s because they lived with the aristocracy and other important figures in history. For example, they’ve lived with Marie Antoinette, Madame Pompadour, the Dukes of Windsor, and Josephine Bonaparte.

In modern times, they’re famous for starring in several movies and television series (for example, “The Adventures of Chatrán,” “Pocahontas”, and “Men in Black”).

When it comes to their physique, this breed is small, muscular and well-proportioned. However, its head is large in relation to its body. Their faces are covered with wrinkles, they have a square muzzle, large dark eyes and two types of ears: “button” (folded forwards) or “pink” (folded back).

The pug dog breed’s hair is soft, shiny, and tight. Also, these dogs can be two colors: silver or apricot. Having black on their face is common. In addition, their tail is spiral-shaped with one or two coils. And, they can weigh between 13 and 22 lbs and measure 12 to 16 in.

This breed is unique for more than just its physical characteristics. This canine’s official motto is “Multum in parvo,” which means “a lot in a little.” Pugs are very affectionate and love to play at all hours. They constantly want to be around people and, if left alone too often, can develop separation anxiety.

We don’t recommend adopting a pug if you have small children at home, or if you’ll be out of the house a lot. These dogs require a lot of attention and can even get sick if they don’t get it. Pugs are very sociable and get along well with other dogs and people of any age. They’re cheerful and love attention.

However, they’re not great with intensive games (which is another reason why you shouldn’t adopt one if you have small children at home). They’re easy to socialize as long as you start training them as puppies. In addition, they should get exercise every day and play constantly. That way, they won’t get bored and resort to destroying furniture or other things in your house.

Caring for the pug dog breed

When it comes to adopting a pet, it’s very important to know what the dog needs and how to care for it. So, if you’re thinking of adopting a pug, you should know that brushing once or twice a week is essential. This will keep it from shedding.

Also, they need to get moderate exercise and take walks every day. However, you have to keep in mind that their robust build and flattened snout won’t allow them to do intense activity. In addition, hot and humid climates aren’t good for them. And, since their eyes are more exposed, you need to take special care of them. Otherwise, they could start to hurt.

Another thing to keep in mind is that the wrinkles on their face can accumulate dirt. You can clean them once a week (along with their eyes) using a moist cotton ball. Also, the “button” ear type can cause some problems because they can accumulate moisture that will cause fungus or infections.