The Dog Who Rescued Another Dog From Drowning in a River 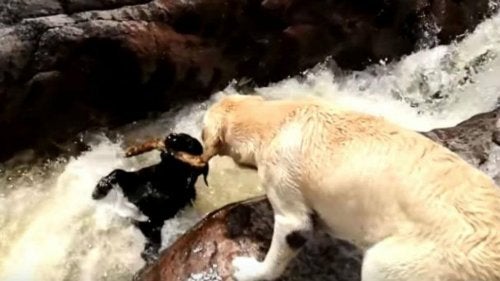 We all know how loyal and noble animals are. Whether it is a person, a dog, or another animal that is in danger, if a dog can do something to save another life, they will do it without hesitation. That is what today’s story is about: a dog who rescued another dog from drowning in a river.

The video of this story went viral on social media and YouTube. No wonder, as the heroic act of a dog who rescued another dog from drowning could not go unnoticed. Would you like to learn more about their story?

How Did the Dog End Up In a River?

It was a day like any other, and a black puppy went out for a walk in the country with his owner. The owner threw a stick, and the dog started to run after it as fast as he could.

The stick went into the river, and when the dog launched himself into the water to get it, the river’s strong current began to drag the dog under, without giving him the chance of escape.

But not all hope was lost. There was a spectator nearby that no one could have expected: a Labrador who happened to also be taking a walk with his owner in the same area. Without an ounce of hesitation, the Labrador ran over to the river to help his furry friend.
The Labrador got a grip on the stick that the dog in the river was firmly holding on to. He grabbed the other end and started to walk backwards, until he was able to bring the drowning dog back to the surface.

The dog that was being rescued, let go of the stick and simply shook off the water, as if nothing had happened.

People say that animals act instinctively, while people usually act on reasoning. Sometimes it is hard to know the right thing to do. However, we have never seen an animal let another animal die, even though we have unfortunately seen people who let other humans die. What part of that is instinctual or rational?

Other Animals Who Also Rescued Dogs From Drowning

We have told you a few stories about animals who have saved others, even when they have had to risk their lives in order to do so. But now that we have told you this story today, we figured it was the perfect time to mention some others.

These are just some of the most amazing stories:

They say that animals are better than many people. Is there any question of that?

Dogs Love You More When They Understand You