The Golden Retriever: A sweet and loving breed 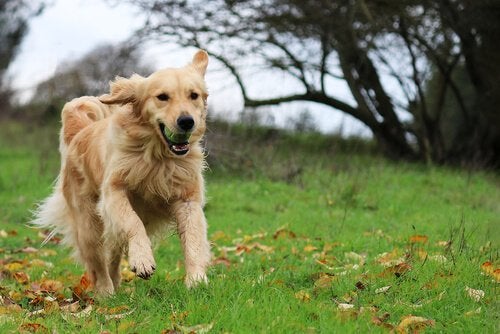 The Golden Retriever is one of the most beloved and popular breeds because because they are beautiful, obedient, and have a loving personality. This dog is well-known for its nobleness. Would you like to learn more about this adorable animal?

Learn all about Golden Retrievers

Golden Retrievers originated from Scotland and were used for hunting fowl. Fowl hunting was popular among the rich during the  mid-eighteenth century.

The breed probably originated from crossbreeding retrievers with water dogs, although it’s not exactly known which breeds were crossed to get Golden Retrievers.

The breed probably originated from crossbreeding retrievers with water dogs. Ever since the advancement of hunting weapons, hunters were now capable of killing their from a distance.  They often would lose their fallen prey to Scotland’s rough terrain. So, an intelligent and strong dog was needed to retrieve the dead prey.

There are a few different types of Golden Retriever. Let’s take a look at each kind:

This type of Golden’s snout is wider and shorter than other breeds, its forehead is large and square. British Goldens have short legs, tails, and are very deep chested. Their eyes are round and dark, and their fur is usually golden or cream colored.

This breed’s fur has a light or dark golden color. Golden Retrievers have two layers of fur — an inner layer that protects them from extreme temperatures, and an outer, wavy layer, which the dog sheds throughout the year.

Goldens are great hunting dogs, guide dogs, police dogs and rescue dogs, and do well at any king of work with people.

Golden Retrievers are not aggressive at all, so they’re perfect family dogs. These dogs are so noble they’re willing to sacrifices their life in order to protect their family.

This breed is unfailingly loyal and friendly. However, if you are thinking about adopting one, you should consider their size and make sure your home has enough space for him to move around in.

These dogs are very adaptable, which makes them perfect dogs for most people. They are easy to train due to their high level of intelligence and good-natured personality.

Due to their large size and high energy level, Golden Retrievers need daily exercise. If you are thinking about adopting one, you should consider your health and age, since not everyone would want to go on long daily walks.

If your Golden Retrieve doesn’t socialize properly at a young, he may destroy your house instead of being aggressive like other breeds. You should remember to brush your dog’s fur once a week to remove any dead skin and preserve its shine.