The Guide Dog Who Saved His Master's Life on 9/11 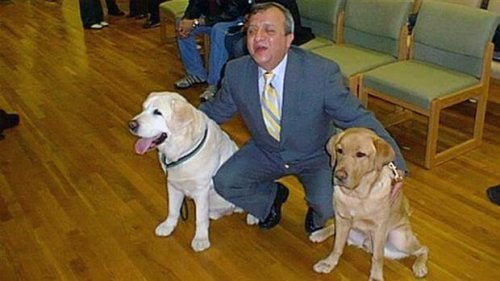 On every annual anniversary of the Twin Towers terrorist attack in New York City, there are several memorials honoring all victims and survivors. In this article you can read about the story of the guide dog that saved his master’s life.

A man, his guide dog, and that horrific memory

17 years after 9/11, the memory of the Colombian engineer Omar Eduardo Rivera and his guide dog named salty, still touches the hearts of many.

On that fateful day, Mr. Rivera (who is blind) was working on the 71st floor in the First World Trade Center, in which the New York and New Jersey Department of Information Services and Technology Port Authority offices were located. The guide dog was next to him, as always.

Suddenly, Mr. Rivera heard a loud bang and felt the building shaking. He also realized that the animal was worried. So, he grabbed Salty by the leash and started walking towards the closet emergency exit.

The engineer says that he instantly knew that getting out of this situation alive was going to be very difficult, due to his blindness and so many people panicking to exit the building.

Read about the story of Salty, the guide dog who saved his blind master from dying in the First World Trade Center in New York on 9/11.  17 years after the tragedy, the story of Omar Eduardo Rivera brings back memories of his beloved and loyal guide dog.

In midst of this life threatening situation, Rivera decided to save the dog. He let go of the leash and ordered him to leave without him. But a few minutes later, Salty returned to his owner’s side.

Among all of the chaos from this dangerous situation– an airplane crashing into a building– the two were able to exit the building after walking down 70 floors.

The journey lasted more than an hour. When the man and guide dog finally reached the street, the animal was able to lead his owner to a safe area. Shortly afterwards, the tower collapsed.

A guide dog that always was by his owner’s side

“It was at that moment I realized that Salty loved me as much as I loved him,” remembers Rivera, who in 2001 was 44 years old. His guide dog’s loyalty allowed him to continue living with his family. He was able to enjoy his granddaughters, who were born a few years after the terrorist attack.

Salty, the beautiful Golden Retriever, continued guiding the blind engineer for a while longer. The dog eventually passed away in 2008. However, before his death, he was recognized for his heroic actions on many several occasions.

Among the awards the guide dog received was the Dickin Medal. This medal was awarded by the People’s Dispensary for Sick Animals Veterinary Association. Rivera’s guide dog had been trained in 1998 by the Guiding Eyes for the Blind foundation in Yorktown Heights, New York.

Dogs– they do so much for us

Also, we can’t forget to mention that, after the terrible terrorist attack on the Twin Towers, dogs became import for rescuing victims buried under the rubble.

However, in regards to this story, it was a guide dog’s love and loyalty that made it possible for a blind person to survive this tragic situation.

However, Salty was not the only guide dog present in the buildings that attacked by airplane crashes on 9/11. Roselle was also there. She guided her blind master, Michael Hingson, from the 78th floor of the same tower. However, this noble animal — a Labrador Retriever — didn’t only guide her owner to safety.  She also helped 30 other people escape from that tragic event.

Source of the main image: www.abc.es