The Harrier is a hunting dog that's very similar to the well-known and beloved Beagle. Both are domestic animals that possess all the qualities of a perfect family companion. 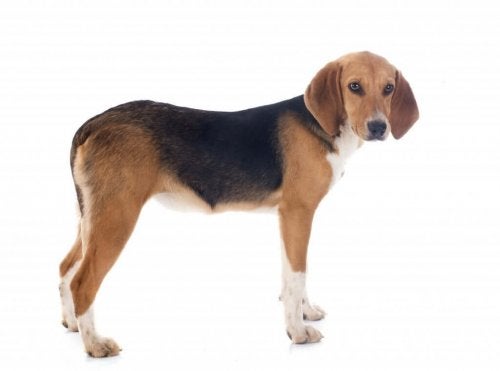 This canine breed of English origin, very similar to the Beagle, is the perfect companion… Not only as a professional hunter but also as a pet for families with children as well. What’s more, thanks to the Harrier, whose first records date back to the 13th century, we can have an idea of what it was like to hunt in ancient times.

The development of the historic Harrier

Even the great British breed expert John Henry Walsh, who wrote under the pseudonym Stonehenge, had his doubts about the exact origin of this breed. The Harrier has been compared to the Foxhound, another very similar hunting breed.

The version that most experts accept connect these canines with a meridional dog breed that existed in Great Britain until the 19th century. The first registers of the Harrier, however, go all the way back to 1260.

In the British islands, hunting–especially fox hunting–was a very popular sport among the highest levels of society. The fact that these animals could follow their tracks made them a favorite when it came to this sport. And this is why this breed has lasted until today.

The characteristics and morphology of the Harrier

The International Cynological Federation classifies this breed in group six, which includes hounds and similar breeds. So, we’re looking at a strong and lightweight animal. In comparison to the Foxhound, we can see that it has a better demeanor and is less muscular.

As for its size, the Harrier measures between 19 and 22 inches at the withers in males. Females, at the same time, are somewhat smaller. Their backs have a slight arch and their chests are deeper than they are wide.

Their tails are medium-sized. They have straight fur that’s not too short, and which is white with spots in tones of black and orange. At the same time, the breed standards accept the French variant, which has a black coat that covers the top part of its back.

The life expectancy of the Harrier varies between 12 and 14 years. This breed has a very developed sense of belonging to a pack. Therefore, it especially enjoys socializing with other animals and spending time with its family. What’s more, this is a very intelligent and also stubborn dog breed. Therefore, serious and continuous training is essential.

In the same sense, it’s important to keep in mind that Harriers don’t tolerate being alone very well. Destructive behavior, like that which develops in greyhounds lacking exercise, also appears in Harriers that spend too much time alone.

When it comes to grooming, it’s best to brush these dogs regularly to minimize the appearance of parasites and skin diseases. What’s more, it’s a good way for dogs and their owners to reinforce their bonds. It’s also important to cut their nails regularly.

As this animal is a hunting dog, it needs at least one hour of intense physical activity every day. This breed is intelligent, fun and, above all, very expressive. Harriers love to bark and make themselves heard loud and clear.

Like many other breeds, there are certain illnesses that the Harrier is more vulnerable to than other canines. For example, Harriers are prone to hip dysplasia and visual problems. However, these animals tend to have few other health problems over the course of their lives.

The training of hunting dogs should be based on a serious of basic guidelines:

The Pharaoh Hound: A Primitive European Hunting Dog
Today, we want to tell you all about the Pharaoh Hound, a unique dog whose origins may go all the way back to ancient Egypt. Read more »
Link copied!
Interesting Articles
Dogs
Gordon Setter: The Most Beautiful Pointing Dog