The Irish Wolfhound, The Giant of Dogs 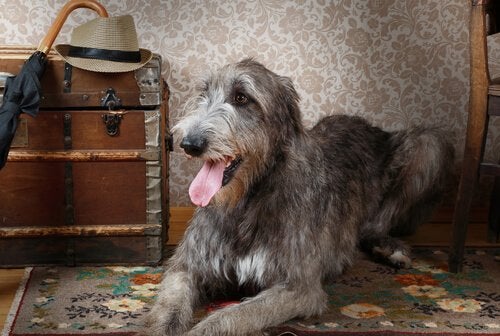 The Irish Wolfhound is the tallest dog breed that exists. This breed was almost on the brink of extinction, so their genes were reinforced by the genes of the Great Dane, which is why it’s taller, even if it doesn’t look like it. This an incredibly good-natured breed that’s gigantic.

The breed is so old that its origins have been lost to history. This breed is known to be from Ireland and the Celts used them in hunting and protecting cattle from wolves. Even Julius Caesar acknowledged them for their nobleness and beauty.

They’re originally from Ireland but the Romans took them all over Europe. However, by 1800 they were in danger of extinction, like many other dog breeds. So, people started to bring them back by crossing them with Great Dane or Scottish Deerhound in order to make them more resistant.

The Irish Wolfhound is a very special breed. It’s classified as a wolfhound by the FCI, a close relative to hounds and greyhounds, even though this dog doesn’t really look like either of them. Furthermore, a wolfhound has no problems facing up to wolves in order to protect cattle.

They’re the tallest breed of dogs. An adult can stand up between 70 and 80 centimeters, without much difference between males and females. It’s a giant dog which can weigh up to 55 kg.

The shape of its head is like a greyhound, with a long, pointy snout. The difference between the cranium and the nose is very mild, and they have small dark eyes. It also has typical wolfhound ears: small, triangular, and fallen at the sides.

However, it has long and tough fur. It’s at its longest over the legs and thickest around the tail. The hair color can vary from grey, tabby, black, white, etc.

The Irish Wolfhound has a large chest and a slim belly. The shape of its body makes it look smaller than other giant breeds of dog, but it’s just because of its proportions.

This breed is sometimes called the “big friendly giant” because its one of the calmest and most docile breeds there is. The Irish Wolfhound is friendly and extremely affectionate with the family. They have the perfect personality to be around children, although because of their large size they could be a little rough or careless.

They were used for protecting land because of their imposing size, but in reality, they’re far too friendly for this kind of work. Therefore, its work is limited to the countryside: hunting and guarding cattle.

These dogs also have a great hunting instincts, so playing fetch with them is a good idea. On the other hand, there are many other tracking games that they’ll really enjoy.

A dog as big as this hound is prone to different diseases and health problems. However, any attempt to prevent these problems must be done with advice from your vet.

Like many other dogs, this breed is prone to hip dysplasia. They’re also known for having a twisted stomach, which is a very serious problem that can be fatal.

There is a higher rate of bone cancer with this breed than other breeds, as well as cardiopathies and eye problems, such as retinal dystrophy.

All dogs need a regular check-up by the vet, especially this dog breed because it needs a lot of special care due to their large size. Make sure you follow the vaccination and de-worming schedule.

The Irish Wolfhound is a calm breed but they’re huge. You don’t need to make them exercise or play fetch. However, you need to take them for long walks so they can burn some energy.

Finally, the Irish Wolfhound is the tallest breed that exists. However, it doesn’t just stand out for its size but its really affectionate and friendly.