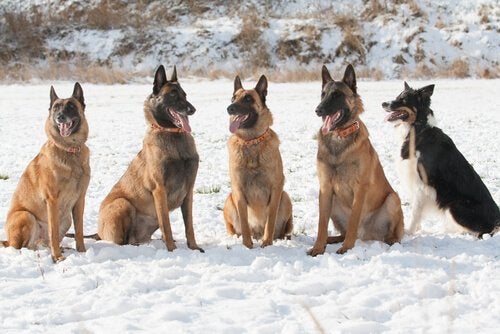 The least well-known of the ‘shepherd’ dogs is the Belgian Shepherd. It’s also known as a Laekenois Belgian Shepherd. This breed is extremely interesting. It could even be considered the most interesting of the species. It has many particular characteristics and they can make a fantastic choice for a pet.

In this article, we’re going to share some details about this breed of dog so that know what we’re talking about.

Origin of the Breed

The Laekenois Belgian Shepherd is a large dog. Its name comes from the royal castle of Laeken. There, at the end of the 14th Century, they used large dogs with tough fur as guardians. And this is where this unmistakable breed comes from. Interesting, right?

In Belgium and Germany at the end of the 19th Century there were many shepherd dogs. Since there were so many, they proceeded to divide them into 4 distinct breeds. They were separated by their fur and colour. The four different breeds are:

Characteristics of the Laekenois Belgian Shepherd

It’s a breed full of qualities. The Laekenois Belgian Shepherd is an energetic, protective, vigilant, and intelligent breed of dog. They’re very faithful animals. They can also be very impulsive. Generally, they stay by their master’s side. Sometimes, they can be quite surly with strangers. They love to be the centre of attention and they have high self-esteem.

They’re extremely caring animals. They’re ideal for living with children, although they may not get on well with other dogs. They’re a very territorial breed with a big ego. Despite this, they’re a great choice as a pet.

Regarding how they look, they’re quite a boxy-looking animal. Their limbs are consistent and strong. Moreover, they’re a very agile breed. They have erect triangular ears and a strong tail.

But maybe it’s their fur that you’ll notice most. It’s tough and coarse and a rusty reddish color, a bit like a lion. There are some with black shades, mainly on the snout and tail.

Specific Care of this Breed

The Laekenois Belgian Shepherd needs a lot of activity and exercise. It’s a breed that has a lot of energy. If they don’t spend some energy, then nervousness and anxiety can cause them serious health problems. You should take them out for a walk often, even more than once a day.

At the same time, the Laekenois requires a lot of affection. They very much like to be accompanied and feel loves. If they feel alone or abandoned, they might show significant changes in mood. If left alone they could turn surly or grumpy.

As we said earlier, this breed of dog is perfect for a family pet.

We shouldn’t forget to mention that this is a breed with a big personality. It’s important to begin training them as soon as possible. If you don’t, you’ll very soon experience serious behaviour problems in the future.

With the right training, a Laekenois Belgian Shepherd can be the perfect dog., being both affectionate and obedient.

This shepherd is a very creative and intelligent animal. The Laekenois Belgian Shepherd hates to be bored. When you have one of these dogs at home, you need to attend to them well and tend to their needs. Diet is just one important thing for this breed of dog.

Regarding their fur, this doesn’t cause a lot of problems. It’s very short, strong, and practical. It doesn’t change with the weather or seasons, but they still need basic care and you need to look after their hygiene, just like any dog.

Although it’s a very healthy and strong breed, the Laekenois Belgian Shepherd has a tendency for certain illnesses. These can include hip displacement and epilepsy. It’s important to pay regular visits to the vet to prevent any of these problems developing or getting worse.

The best thing about the Laekenois Belgian Shepherd is that they can perfectly become another member of the family. They don’t commonly cause problems and owners enjoy having them at home. Furthermore, they have a great relationship with children, making them one of the most chosen dogs for families.