The Lion Dog Becomes Famous on The Internet 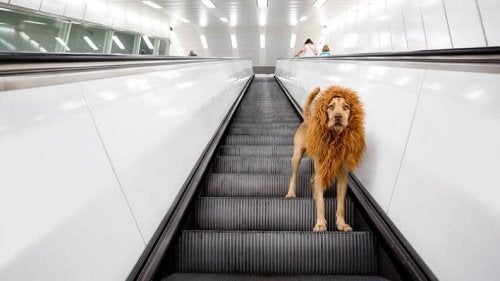 There are many celebrities who have not managed to make a name in their country and have had to emigrate to others to become famous. This has been the case for several Spaniards. For example, Raphael. Almost nobody listens to him in his country, but in Latin America, he is currently one of the greatest musicians. Well, something similar has happened to the Lion Dog.

Haven’t you seen the dog lion on the Internet yet? He has become famous, though yes, outside his country: Spain. Would you like to know his story? We’ll tell you, you’ll love it!

The Lion-dog: how he was discovered

Unfortunately, there are many sad stories that you’ll read about here at My Animals. That’s why we’re happy to tell you this story about the Lion-dog, because, in addition to having a happy ending, we’re sure you’ll get a smile, if not a laugh.

Through the streets of Malaga, in Spain, the Lion-dog walked like hundreds of other dogs in the city. This medium-sized and tan-colored dog was trying to find something to eat in the trash. No one looked at him, much less moved a finger to feed him.

However, a young German woman who loves photography, could not ignore his presence. She still doesn’t know what attracted her to him, or why he was different from other dogs.

His physique was the pretty normal: cinnamon color, medium size, nothing special. But Julie Werner, the German photographer, felt a special connection that she could not ignore and took him home with her to Hamburg, Germany.

Tschikko, the Lion-dog, from rags to riches

They say that some are born as stars and others become stars, but throughout life, this is something that can always change. Anyone who had met Tschikko in Malaga, wandering around looking for a piece of food, would have never claimed that he was born a star. Although, what would those who saw him now say?

Julie made him a star by having the great idea of making him the protagonist of her report “The lion of the city.” We don’t know if the photographer saw Tschikko for the first time and imagined him being a lion dog. We do know that her idea has had a huge success because both she and her lion-dog have become famous in social networks and throughout the cyber world.

Why? As the title of Julie’s report says, I needed a lion, but I only had one stray dog. Although … maybe there was something he could do! Yes, that’s right, Julie thought that making a reddish wig that resembles the color of her lion-dog could make a difference and people could see him as a real lion. In truth, looking at the photo, it seems more authentic than Jumanji.

And that’s how Julie began her report. She began to photograph her new friend with his wig all over the city, creating a story with each image.

The success of the Lion Dog

Julie couldn’t imagine the success of her story which soon went viral reaching thousands of people. Some confused Tschikko with a lion and others, realizing that he was a lion-dog, couldn’t help but laugh.

Julie, who has also come to love her new friend that she rescued from a sad life, is going to take advantage of the beauty and sympathy people feel towards the Lion Dog and plans to make a report called “The lion dog and his return to the world”. This will contain images of Tschikko in different parts of the world with his tawny wig.

This trip is likely to include Spain and perhaps the lion-dog breaks myths by becoming a prophet on his own land. Who knows?

Link copied!
Interesting Articles
Dogs
A Dog’s Origins According to its Ears