The Podenco Canario: A Peculiar Dog 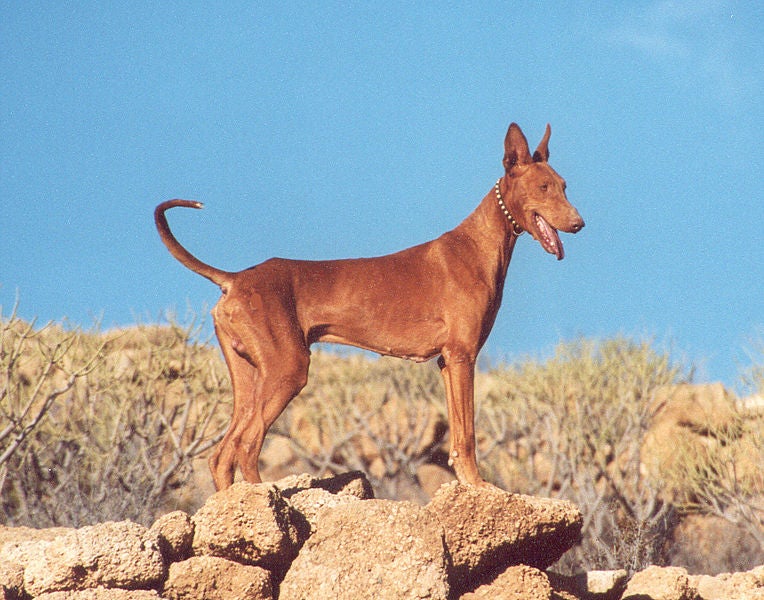 By now, we know about hundreds, or perhaps even thousands, of dog breeds. Each one is different from the others, but they all have attractive characteristics that make them special and unique. In this article, we’ll tell you everything we know about a very special breed that you may not know about: the Podenco Canario.

The Podenco Canario’s History and Characteristics

The Podenco Canario comes from the Canary Islands. Legend has it that the islands owe their name to these dogs, and not the other way around. It seems as though they inhabited the area ever since its inception, and that the word canine (can-ine), is evidence.

This dog descended from Perros Majoreros breeding with Molossian Hounds that were taken to the island, such as the Spanish Perro de Presa. What they were trying to get was a large dog, like a bulldog. However, they wanted them to have the Perro Majoreros’ agility, nerve and working ability. That’s how the Podenco Canario was born.

Texts that date back to the sixteenth century refer to the breed. However, at that point, the Podenco Canario was not yet a defined breed, much less a recognized one, as its morphology was not uniform.

A little later they began to gain popularity because of their ability to work. They were used as guard dogs for houses, herds and properties, as well as cattle dogs.

By the eighteenth century, the breed had just about died out due to the influx of the British on the Canary Islands, who promoted dogfighting. They were looking for big, strong and agile dogs, and Podenco Canario dogs checked all of those boxes. They were used for dog fighting for years, until fortunately, dog fighting in Spain was finally banned.

Podenco Canarios are either chocolate brown or light brown brindle, or white. They have a sturdy head and a snout that is shorter than their skull. It’s wide at the base and tapers towards the nose. Their snout should always be black.

As far as facial characteristics are concerned, they have a peculiar set of wrinkles that appear on their foreheads when they’re on alert.

Their eyes are medium-sized, usually either light or dark brown. Yellow and other light colors are never accepted. Their ears are naturally perky and tall, and they have a medium-length tail they may keep erect like a sword while walking.

The Podenco Canario is a self-confident and very balanced dog. Their guardian instinct is one of the breed’s main characteristics. This is very understandable, considering that it was one of their main jobs for many years.

This instinct make them a bit distant with people they don’t know, but they’re very affectionate with their families. Podenco Canarios truly enjoy time with those they love.

Like any large dog breed, they should be socialized starting as puppies. If you do not teach them to control their strength, they can get out of hand.

How to Care for a Podenco Canario

Due to the breed’s size, the Podenco Canario’s joints will suffer as the years go by if they do not get a good daily dose of exercise. A long, daily walk is essential to keeping them healthy.

To sum up, they’re large, very good-natured dogs. If you’re thinking of adopting one, just keep in mind that you must socialize him, have plenty of space for him, and budget wisely because an animal of this size eats more than you expect. The Podenco Canario makes a great pet.