Sociable and affectionate, this is a great pet for homes with children. Likewise, due to being so intelligent and docile, they're very easy to train. 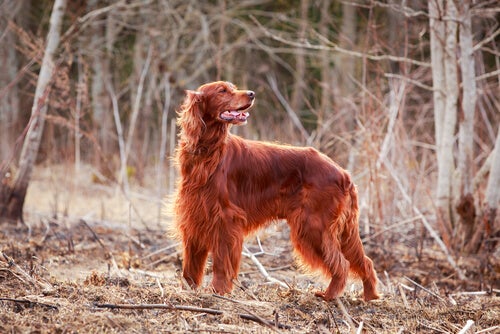 The Red Irish Setter was originally a hunting dog, but their extraordinary beauty and personality has took them out of the forest and brought them straight into people’s homes. Read on to find out more about this incredible breed.

History of the Red Irish Setter

The Red Irish Setter comes from the white and red varieties, which are less popular than the others. According to records dating back from the 18th century, the the current breed is still similar to the past breed.

The Red Irish Setter in a great hunting and pointing dog. In other words, when they hunt with their owners, they would point to the direction the prey is hiding.  Another breed that does this same while hunting is the Pointer.

However, in the 19th Century, they began appearing in beauty pageants where they quickly gained huge popularity. Since then, setters have been bred more for beauty pageants than hunting, which is why today there are currently very few hunting setters.

As you can see in this article, their hunting instinct still remains. In regard to their physical appearance, despite beauty pageant standards, very little has changed over the yeats.

This breed stands out for its svelte, elegant, and agile appearance. They can grow up to 65 cm in length and weigh no more than 30 kilograms due to their thin body and long legs.

Their head is long, thin, and smooth. The nose can have a light or dark color. Their ears are on the lower part of the head, they are triangular shaped and rounded, and they droop to the sides.

These dogs have long, fine, silky and shiny fur all over their body. Their hair is longest hair on the ears, belly, chest, and tail. According to the standard of this breed, their hair should be as straight as possible but wavy. Their tail is long, hangs low and it never raises above the spine, even when they are on alert.

As its name suggests, the Red Irish Setter only comes in a reddish-brown color. They can have white marks on the face, toes, and chest. There are other varieties of setter that come in different colors such as black or with spots.

The setter’s hunting genes still remain despite several generations of being used as house pets. This is truly amazing this breed has always been energetic, intelligent, hard-working, and very friendly.

In general, these dogs are well-behaved but they need a good amount exercise to avoid bad behavior. They need three good walks a day but they also need mental exercise such as following trails, problem-solving, and they benefit from interactive toys.

They’re very friendly and affectionate,which makes them a great dog for children. They’re not distrusting of strangers, so they’re no good as a guard dog. However, this means that they tend to make new friends wherever they go.

Because they’re so intelligent and docile, it’s not difficult to train a Red Irish Setter if you adopt a game-oriented approach based on positive reinforcement. Working and training a hunting dog like the Red Irish Setter is easy.  However, establishing a dominant relationship with them can be counterproductive.

Caring for a Red Irish Setter

The Red Irish Setter is generally a healthy breed. However, because of their size, they are prone to hip dysplasia and they can suffer from a twisted stomach. The most common conditions are haemophilia, epilepsy, and eye problems.

As with any other breed, only a vet should diagnose and treat these conditions. Likewise, remember to be current on their vaccination and deworming schedule to keep them as healthy as possible.

Their fine, silky hair needs a good brushing every few days. Sometimes knots can develop which, aside from being unattractive, can cause skin problems.

Since they’re dogs that love the hills, they should always be dewormed and you should frequently review their feet and ears for country debris, as well as parasites.

The Red Irish Setter was originally a hunting dog. However, it’s incredible beauty and friendly personality has brought them directly to people’s homes. Remember, keep your setter physically and mentally exercised and you’ll get the best out of a loyal and affectionate friend for many years.