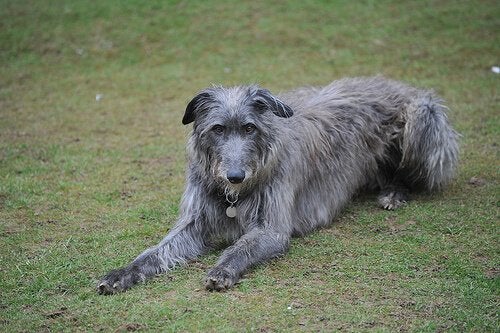 The Scottish Deerhound, also known as the Deerhound is a large, stately, quiet and obedient dog. Their fur makes them perfect for cold climates.

Origin of the breed

This breed is a possible direct decadent of the primitive Celtic hound. These dogs were bred by Scottish clans in order to use them to hunt wolves and big game. Although Scottish Deerhounds were on the verge of extinction, Sir Walter Scott and XVIII century Scottish trends gave the breed a comeback and they are still around today. In fact, in the 19th century, Queen Victoria herself had one as a pet.

The physical appearance of the Scottish Deerhound

The Scottish Deerhound is a large-sized dog which may have a coat of different shades of gray. It is well proportioned and has a relatively small head. Morphologically speaking, its height at the withers must be a minimum of 76 centimeters in males, and 71 centimeters in females. As for their weight, males usually weight in at 45 kilograms, and females at 36 kilos.

The Scottish Deerhounds usually has gray fur, although some Deerhounds have reddish sand or reddish brown fur with a black snout, legs and tail. Sometimes, they have white hair on their chests, paws and on the tips of their tails.

The personality of Scottish Deerhounds

Scottish Deerhounds are affectionate and obedient, but they are also independent and require their own space. They are calm inside the house, which is odd for an animal that runs at such a fast speed, something usual for hounds.

Their fur can perfectly adapt to rugged terrain and adverse climates.  This is why they are perfect for coastal, cold and high altitude climates. They can tolerate the cold well, but hot weather is more dangerous for them since the thickness of their skin makes them more likely to have a heat stroke.

They can live for many years although they need space, exercise and to live in a family setting. Their muscles are strong and powerful, so they need to have a protein-rich diet. Like most large breed dogs, there is some risk of possibly developing diseases such as stomach torsion or hip dysplasia. However, all these conditions can be prevented with regular veterinarian check-ups.