The Tibetan Terrier: From The Temples To People's Homes

These dogs were previously used to protect livestock, and over time they were used to protect households. Likewise, the origin of this breed can date back around 2,000 years ago in Tibet. 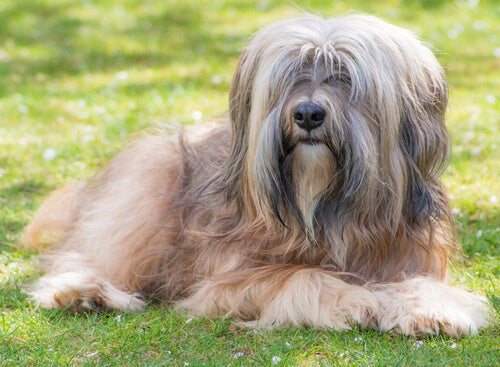 The Tibetan Terrier was originally used to protect livestock and his owner’s family from intruders. However, this breed’s wonderful personality has turned it into a really great companion. They originally lived in Buddhist temples as guests of honor and have now conquered the West as well.

History of The Tibetan Terrier

It’s not exactly known when they first appeared but it probably took place around 2,000 years ago. As their name suggests, they first appeared in Tibet and their main job was to guard and protect livestock, despite being much smaller than normal herding dogs.

Having such a great personality and being great guard dogs, they were soon adopted by nomads to protect them during the night and help them with the animals during the day. Also, many lived in Buddhist temples and were much loved.

Despite this breed’s name, this isn’t actually a terrier. A terrier hunts small mammals whereas the Tibetan terrier is a guard dog. The name is a mistake. When they first arrived to England at the beginning of the 20th Century, they were classified as terriers because of their size, rather than researching their main function.

The Tibetan terrier’s size is quite interesting. It’s large by terrier standards by very small for a dog that guards livestock. They measure around 13.7 to 15.7 inches in height. However, there is no average weight for this breed because they can weigh anywhere between 22 to 35 pounds.

Their most classic feature is their long hair. This breed’s whole body is covered in long, smooth, wavy hair. Their hair is longer around the belly, ears, and tail. People often believe they have beards and even that their feet are covered by hair.

Due to these traits, they can look quite sturdy and boxy. Their facial features are not easy to distinguish because of all the hair. Their ears are round and droop down, and they hard to see despite being so high up on their head. Likewise, they have a curly tail that rests on their back.

This breed’s wonderful personality has taken them off the mountain and straight into people’s homes. The Tibetan terrier is has a very mild, friendly, protective personality.

They’re affectionate and attentive to their human family although they can be very distrusting of strangers. It’s also a very versatile breed. Although they’re used to living in the mountains, they also adapt well to living at home in the city.

They generally get along well with other dogs and are quite playful, but some can be stubborn or very independent. You can’t force a terrier to obey. It requires positive reinforcement to create a collaborative bond between human and dog in order to get them to do what you want from them.

They’re not generally capable of spending a lot of time alone. They get anxious or bored easily, and therefore become destructive or bark excessively. The Tibetan terrier likes being with other people or pets.

Information on Taking Care of Them

The main thing you need to be aware of is know what to do with their hair. This breed requires brushing on a regular basis to get rid of knots as well as a haircut when the seasons change to allow them to molt and lose the dead hairs.

Knots in their hair are not only unattractive, but they can also be painful, cause problems for them to move around, and even cause dermatitis as well as other skin infections.

This breed’s coat is made up of two layers: an exterior coat, and an interior woolly coat that protects them from extreme temperatures, both the cold and the heat. This means despite being able to cut their, you should never do it.

When it comes to their health, this breed is generally very healthy. However, they still require getting regular check-ups by the vet. You can’t neglect their eyes or ears because they are prone to infections.

The Tibetan terrier isn’t a terrier and its stubborn yet affectionate personality makes this breed seem like one. They’re originally from China and lived for generations in Tibetan temples. Plus, their wonderful personality has taken them out of the temples and brought them into people’s homes.