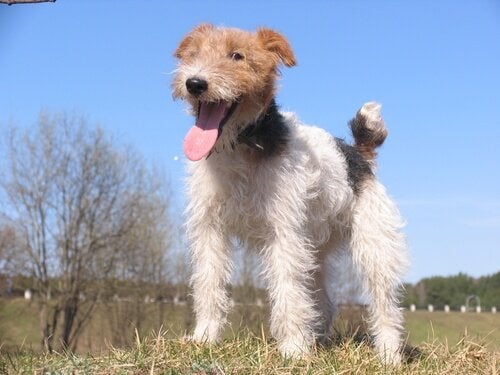 The Fox Terrier is one of the most popular pets of all time.  These dogs were separated into two different breeds during the twenties for the convenience of the breeders at the time. Did you know they were originally hunting dogs? Continue reading this article to learn all about these dogs.

The Fox Terrier as a Watchdog

No one knows exactly when this breed came to be, but there are records of them dating back from the nineteenth century. This dog descends from the Bull Terrier and the Black English Terrier. The British Kennel Club catalogued both wire-haired and smooth-haired breeds as one, until the mid-twenties when the FCI acknowledge the differences between them.

These dogs were originally bred for hunting foxes, rabbits and other small animals. The Fox Terrier is one of the most active and alert dogs that exist today, which makes them sometimes difficult to control.

These dogs are short and light, and they can maneuver themselves easily through any situation, which makes them excellent pets in a neighborhood setting.

This dog is designed to chase down prey at any moment. Without a doubt, the Fox Terrier is one of the most dynamic and interesting breeds in the world. Therefore, they are perfect for living in the countryside and city, as long as they get a proper amount of exercise.

Terriers are hunters by nature, which makes them exceptionally intelligent. Without a doubt, the Fox Terrier doesn’t fall behind, since it’s a very curious animal and is always on the alert for any sudden movements in its surroundings.
They are very friendly to their masters and are quick learners. However, while they learn, they tend to quickly get bored if they have to repeat the same task over again. When they do get bored, they end digging up holes.

The Fox Terrier is very friendly to humans and most dog breeds, because it’s quite affectionate and playful, makes it the ideal pet for families, especially if they are physically active.
Despite of being from several previous generations, this breed hasn’t gotten rid of its hunting instincts. This can be a problem in certain cases: they tend to run after everything that moves, whether it being a cat — their greatest enemy today — or a bus.

The Fox Terrier can be challenging to train, so you need to put obedience as a top priority, and then emphasize on exercise. They are fast learners and consider their owners as equals.

A well-trained terrier can participate in demanding competitions such as agility, specialized obstacle events, or in dog shows. Subsequently, it’s certainly a versatile dog.

The Fox Terrier, just like its entire breed, isn’t prone to many diseases. This is because it has an overall good health and a good body composition. However, there are certain disease that you should be aware of.
These animals are so physically active, they tend to fracture certain bones, especially their shoulders when they’re older. They are also prone to have sight problems at an old age.
They may suffer from cataracts, glaucoma and Ectopia lentis, a disease in which the crystalline is displaced. It can be treated with medications or by removing the lens itself, and applying eye drops for the rest of its life.

Other than diseases that require special care, you should brush their fur periodically, not only to remove dead hairs, but to keep these dogs looking nice and shiny. You should also pay attention to fleas and ticks that can hide between hairs.
Link copied!
Interesting Articles
Dogs
Gordon Setter: The Most Beautiful Pointing Dog