Tips To Keep Your Dog From Being Possessive Over His Toys

There are certain breeds that don't like to give up their possessions. They may even become aggressive if you try to take them away 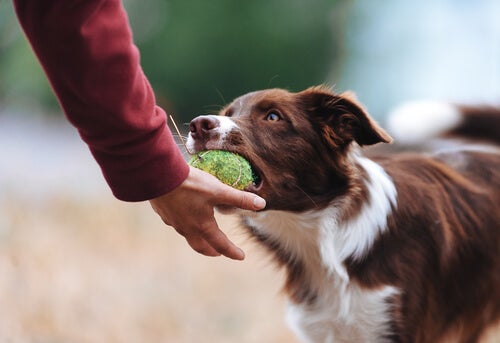 Your pet’s behavior depends on many factors, such the training he received as a puppy. A dog that’s possessive over his toys may have had a too lenient “puppy-hood” or he may have an anxiety disorder. By reading this article, you can learn how to prevent this behavior.

Why are dogs possessive over their toys?

Before trying to change his habits, it’s important to understand why your pet is acting this way. A possessive dog doesn’t want to give anything away that belongs to him. He may become aggressive when you try to take his toy, even if you are playing with him.

This could be caused by different reasons, therefore it’s important to figure them out before you use any techniques to correct their possessive behavior.

An insecure dog is a dangerous dog. You shouldn’t try to look past this. When an animal feels at threatened, his first reaction will be to attack.

Keeping his toys on his bed or in his personal space, and not letting anyone touch them, is a clear demonstration of a behavior known as “protection of resources.” This means a dog will do everything possible to defend what belongs to him.

The fear of losing something that belongs to him can appear in dogs that have been rescued from the streets. It can also be seen in mothers who have had their puppies taken from them. However, this also happens with animals that have always had many toys and objects at their disposal.

Believe it or not, there are some breeds that are more likely to be toy hoarder and be obsessed with them. Of course, nobody should blame the genetic behaviors of animals, but if you have a Golden Retriever, Jack Russell Terrier, Rottweiler, Border Collie or Cocker Spaniel, most likely your dog will be possessive.

These are two emotions that cause your pet problems that go beyond him guarding his toys and not wanting to share them. Situations like when it rains, when your dog stays home alone for several hours, or when something strange happening at home, etc. the animal will try to defend what belongs to him.

Tips to Keep Your Dog from Being Possessive Over his Toys

If you look at your dog as a small child that needs to learn through love and affection, but also with firmness and dedication. Then you shouldn’t wait for the situation to become worse because he may growl, bite, or hurt someone while protecting his things. To keep your dog from being possessive of his toys, we recommend you:

1. Order him to leave it

For pets to understand and obey orders, you should be short and simple with them. A “leave it” is more effective than a “you have to leave that toy where it is.” Remember, animals can’t rationalize your sentences.

Instead of chasing him around the house, tell him to “leave it” as soon as he takes the toy, and reward him when he does. Repeat this exercise several times a day until it becomes a habit.

2. Order him to give it to you

Once he has learned to leave the object on the floor, the next order is to have him give it to you. This can be done in the park when you want him to bring you a ball, stick or whatever you have him fetch.

Again, remember to use phrases like “give me” or “give it to me” with an imperative tone. When he does what you’ve asked, give him a compliment, treat or a pet. That way he can relate the habit to a positive action.

You can’t quit your job or stop doing things outside of the home to change your dog’s habits and behavior. But you can enjoy quality time together. Take him to the park, on a walk through the neighborhood or do something that reduces his separation anxiety. This is something very common in pets that live in the city.

Also, keep in mind that if your dog is possessive over his toys in times of stress — like during a storm — then wait for a sunny day to train him. That way, he won’t relate his fear of thunder to being stripped away from his precious belonging.