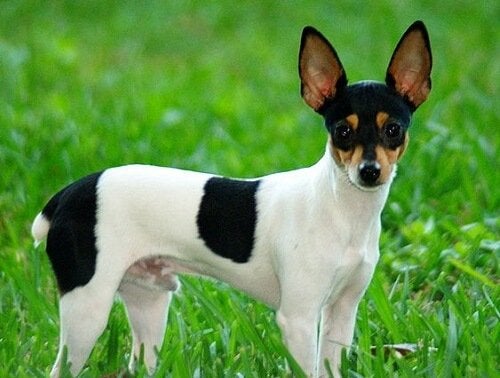 Toy Fox Terriers are descendants of Smooth Fox Terriers that have the unconditional love of small dogs and tenacity of hunting dogs. Their cute ears and sleek fur along with their keen intelligence make these compact animals the perfect pet.

The origins of Toy Fox Terriers

By using several different sized of their ancestors, enthusiasts of the miniature variety decided to crossbreed the Smooth Fox Terrier with other small breeds.

During the first decades of the 20th century, miniature Pinschers, Italian Greyhounds, Chihuahuas and Manchester Terriers were mixed to create the Toy Fox Terriers we know today.

This American breed is a combination of the athletic abilities of the Terrier with the peaceful nature of miniature dogs. The official standard breed was recognized by the American Kennel Club in 2003 and ranks 148th on its list.

However, the official standard allows females to be slightly longer than males. In addition, their bone structure must be strong but proportional to their weight and size. Their gaze is striking, intelligent and alert, with bright black eyes and pointy ears that never touch each other.

Their coat is short, shiny, sleek, soft, and it evenly covers the animal’s body. According to the official breed standards of the American Kennel Club, they have the following colors:

Given their fun and loving nature, it is possible to overlook certain flaws than can cause real problems in the long run. Remember that Toy Fox Terriers, despite their size, are still Terriers.

Certain breeders have referred to the so-called “Napoleon complex” of this breed. Without any consistent training, this dog will most likely want to take control of the situation.  Socializing them at an early age and giving them consistent training are key to creating a positive living environment with these dogs.

Toy Fox Terriers are energetic and athletic, which allows them to carry out a wide variety of activities such as canine agility exercises to hunting. In addition, and as a small dog par excellence, they have no problem lying in the sun or the sofa.

Given their versatility and keen intelligence, they will quickly learn any new game. Despite the bad reputation that small dogs have, this breed is especially great for children. At the same time, remember that young children can be too rough on these dogs as well.

Like any other respectable breed, Toy Fox Terriers are prone to certain diseases. The most common are patellar dislocations and vision disorders. However, it is also a great idea to watch out for blockages from earwax. The life expectancy of this breed is quite high, ranging between 13 to 15 years.

Finally, caring for their coats is quite simple. To maintain its shine and softness, it’s a good idea to brush and bath them on a weekly basis. Toy Fox Terriers love to be brushed, so this can be a good way to strengthen the bond between dog and owner.