Home » Breeds » Dogs » Traits and Personality of the Rottweiler

Traits and Personality of the Rottweiler

The Rottweiler is a well-bred dog in both its traits and personality. They're robust, muscular, dynamic and strong. With a size between medium and large and a very powerful appearance, the Rottweiler inspires both respect and admiration at the same time. 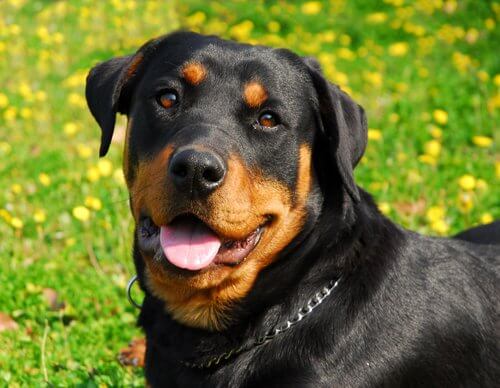 It’s common among those who aren’t familiar with the traits and personality of the Rottweiler to be afraid of them. Their presence alone commands respect because it’s indeed a very powerful dog.

The origin of this dog breed is the German Rottweil district. So, the name Rottweiler actually refers to someone who is from this place. The initial history of these strong animals goes back, in fact, to the era of the Roman Empire. At that time, the predecessors of the current ones were employed as protection and herding dogs.

When the Romans arrived in the Rottweil region, their dogs bred with the native dogs of the place. As a result of this mix, a breed that we now know as the “Butcher’s dog of Rottweil” emerged.

Physical traits of a Rottweiler

The head of the Rottweiler is large and wide. Its snout is square and the ears medium-sized. The latter are droopy and triangular. There are opinions of all kinds in regard to their tails. Old-fashioned types who still consider animals as non-sentient beings believe the tail should be cut. At the same time there are those who are true animal lovers and activists and are committed to maintaining it as it is when the dogs are born.

There are two layers to the hair of this breed:

Even though they’re mainly black, they have several spots of a brownish/reddish tone on their chest, muzzle, cheeks, throat, etc.

Personality of the Rottweiler

Mainly through the magic of films and some isolated accidents and episodes, the Rottweiler was stigmatized a few decades ago. However, in reality, this is a fantastic dog breed. Their bad actions are usually the result of their irresponsible and unscrupulous humans who failed to train them properly.

In all truth, among the traits and personality of a Rottweiler are: they’re highly attentive, obedient, calm, courageous, safe, reliable and loyal towards their human family. As with all dogs, each individual will have their own signs of identity, as well as their own character.

The personality of the Rottweiler is flexible and emotionally stable and adapt well to all kinds of activities. With a little training, this breed is quite suitable for the protection of your family. Also for jobs such as police dog, therapy dog, and assistance dog, due to their obedient nature. They’re also suitable, due to their traits and personality, for the task of search and rescue.

In addition to the above, a Rottweiler achieves good results in dog sports and obedience competitions. This breed stands out for being easy to train as they’re highly capable of learning new things. Furthermore, this is a strong animal, vigorous and, as we said above, flexible and emotionally stable.

You should focus on socializing every dog you have while they’re still puppies. This includes introducing them and allowing them to interact with other animals in all sorts of environments.

This is a very important phase in their lives. If they’re not socialized properly, they’ll become reactive, fearful and insecure animals in the future and nobody will want them around and it’ll make your life hell.

While learning to socialize, the Rottweiler will easily coexist with all kinds of people and in any kind of environment without posing a problem or being a danger to anyone.

The Rottweiler is NOT a dangerous dog breed

What kind of news about Rottweilers do you often see in the news? Well, these episodes are due to the lack of proper socialization of dogs. Most, if not all of those dogs were often the target of violence, neglect, and all sorts of abuse.

So, of course, the consequences are behavioral problems in the animal. Also with it, the increased chances of them causing a serious accident.

As a dog adoptee, you must respect and fulfill a dog’s freedom. Not only for their own welfare but for the good of your community. You must train it properly and responsibly. Only then will you have a great friend who’s sociable, calm and highly affectionate.

Tips to train a Rottweiler

Dogs are social creatures so it’s necessary to spend a lot of time with them. They won’t be happy if they’re constantly alone. Then again, neither would you, and that’s most likely why you got a dog to begin with.

When it comes to the training and education of a dog, you should always do so through positive reinforcement. For example, some products and items on the market such as chokers are never appropriate.

Furthermore, they should have two or three walks a day. You can free the dog a little bit through them, especially if they’re stressed out. And, finally, give them many chances to sniff everything they want and run and chase. 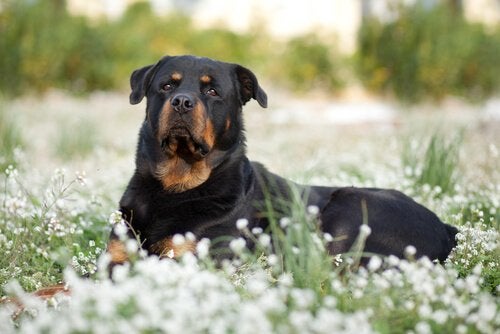 Dangerous Dog Breeds: Are some breeds actually bad?
Are certain dog breeds more dangerous? We'll take a look at this question and whether or not the myth of dangerous dog breeds is true. Read more »
Interesting Articles