Home » Breeds » Dogs » What is a potentially dangerous dog?

What is a potentially dangerous dog? 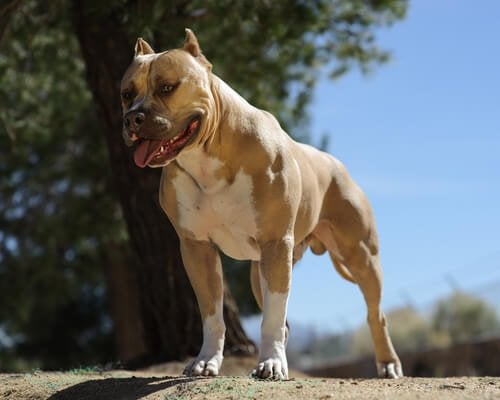 Some countries, such as Spain, use the term “potentially dangerous dogs” to describe and identify certain dog breeds. When it comes to deciding which breeds are on this list, the dog’s traits such as aggression, attack, or tenacity are taken into consideration. Find out more below.

How to consider a dog as potentially dangerous?

Colombia, Venezuela, and Spain have all created ownership laws of certain dog breeds. In Spain, the decree was signed in 2002. The breed must have certain traits to be considered as potentially dangerous:

Which dog breeds are potentially dangerous?

There are a total of 12 breeds that currently listed as potentially dangerous, such as the following breeds:

These dogs are descendants of the English Bull Terrier, and they were originally used for fighting. The World Canine Organization does not accept them, but the United Kennel Club of the United States does. Some countries have even prohibited them. American Pit Bull Terriers can weigh up to 30 kg, and they are very fast, athletic, agile, and strong.

This potentially dangerous dog is from German origin. These strong dogs were used to pull butcher carts to markets. They can be used as shepherd dogs, guide dogs, watch dogs, search and rescue dogs, etc. They have a strong and compact figure, an agile and resistant body, and a large head.

Rottweilers are calm, obedient, and gentle, which you may find hard to believe since they are considered to have a “bad reputation” for being dangerous. Likewise, not to mention they are very confident and brave animals that clearly react to danger.

This is the only Argentine breed that still exists (the other two have died out). They were created for hunting large animals such as pumas, foxes, and wild boars in the 1920s. These dog are the outcome of crossbreeding several European dogs and are able to hunt in packs. Their coat is completely white except for the nose, which is black. People usually crop their ears to make them look straight and pointy.

The Dogo Argentino is a work animal that you must socialize when they’re a puppy in order for them to work well in groups. Likewise, they need a certain amount of space to exercise or get rid of all of their excess energy and prevent them from becoming aggressive.  Several countries have prohibited this breed.

The Doberman Pinscher is another potentially dangerous dog from Germany that was created by crossbreeding several breeds: Pinscher, Rottweiler, Weimaraner, Beauceron, and Manchester Terrier. The Doberman has a square body, long snout, small eyes, and highly placed ears.

This breed is muscular, athletic, and strong. They can measure up to 72 cm, their hair is short and black or brown with rust-colored markings. Their life expectancy is up to 13 years old.

This dog of Japanese origin was used for defending their country and hunting bears due to their great strength and demeanor. They were created by crossbreeding an English Mastiff with a Tosa Inu (which is also considered a potentially dangerous dog).

Akita Inus can do all types of heavy duty work. They have a thick, brindle, white or red, double layer coat and triangular ears. The Akita Inu’s character is fairly quiet, reserved, loyal, protective, and caring. They tend to be dominant with other dogs.

They originated from France and are part of the great Mastiff family, which are animals with a lot of power, strength, and agility. They were used for both hunting large game and as guard dogs.

Dogues de Bordeaux have a bulky head with wrinkly skin, widely spaced eyes and they have yellowish-brown or reddish-brown coat. Likewise, they have a springy gait and are caring, loyal, and very attached to their owners. However, they are quiet and reserved with strangers.