Why dogs love to roll around in the dirt and mud 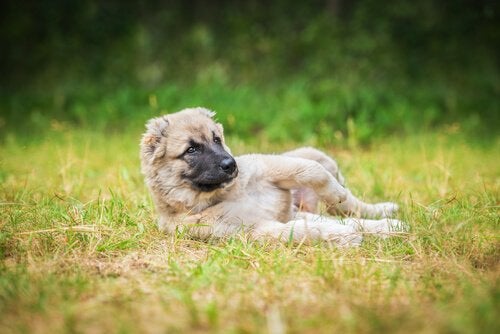 Reasons dogs love to roll around in the mud

Rolling around in mud and muck is a behavior that, of course, dogs do not share with human beings, and perhaps for this reason pet owners don’t understand it and usually don’t like it. It’s true that your dog has to get a bath afterwards, which is a hassle. But all the same, punishing your dog for this behavior is kind of like cutting him off from his wild side.

Like we said, dogs retain some aspects and behaviors from their wild ancestors. Like wolves (their closest relatives), dogs need to camouflage themselves when they’re hunting prey. So one thing they do is cover up their own scent, which can involve smearing themselves with mud, foul-smelling substances or even dead animals.

When your dog rolls around in prey, he leaves his unique smell on its back or legs. This is how your dog expresses his happiness for having found the prey before other dogs. When other dogs eventually find the prey, they’ll know who it belongs to when they smell your dog on it.

Dogs have hundreds of odor-producing glands on their bodies and it’s easy for them to leave their scent on things. It’s also a way they communicate with the other members of their pack about what they found.

3. To maintain the dog’s unique smell

People make their dogs’ lives more difficult by bathing them with perfumed soap (even if products are suitable for animals). Smells that are ‘dirty’ and ‘gross’ for humans are actually a dog’s unique ‘ID‘, so to speak.

Dogs communicate with other dogs using their scent, even though it may be unpleasant for humans who have to share a house with them. And if we think that dogs like bubble baths and talcum powder … we’re wrong. If it were up to dogs, they would rather wallow in horse droppings than take a bath and erase their unique scent.

4. To enjoy the smells and sensations

Although it’s hard for us to understand, dogs love to wallow in dirt, dead animals and garbage. A dog’s sense of smell is not the same as a human’s. In fact, it’s much better. Cow dung may be more pleasing to your dog than a fancy perfume is for humans.

This one has also been inherited from dogs’ closest cousins, the wild wolves. According to a study, when a wolf in a pack finds something that catches his attention, he first sniffs the prey and then wallows in it to cover himself with its scent. The wolf then transfers the smell to the rest of the pack, so they can decide whether to eat the prey.

The objective in this case is to demonstrate to the pack that the dog has caught something interesting, and therefore deserves praise. Now, though, the poor dog will be reprimanded by his owners, since the smell after a dog has rolled around in the mud or on prey can be unbearable.

What can we do to keep our dogs from rolling around in the dirt?

First of all, you don’t have to scold or punish your dog, because if your dog does it, it’s a purely instinctual behavior. What you can do, however, is to avoid encouraging the behavior.

For example, if you take your dog out for a walk to the park and you see that he’s rubbing against something dirty, firmly tell him, “No,” and remove him. You’ll need a lot of patience because your dog may not understand your command the first time you give it.

If your dog usually does it in your own yard, the fix could be as simple as picking up your dog’s droppings more often or making sure that there’s no litter, dead animals or anything else that would catch his attention.