Dogs in Group 8: Breed Classification According to the FCI

Breeds with similar characteristics fall within the same major groups. Learn the details of group 8, here 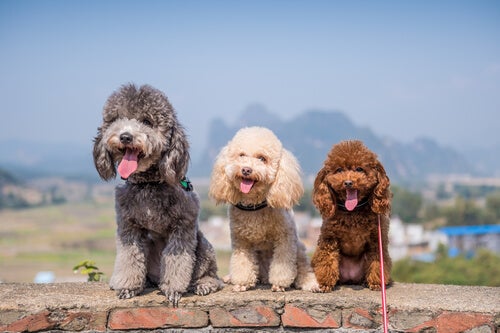 The International Cynological Federation determines the standards of each dog breed. Then, they classify them according to their characteristics. In this article we will tell you which dogs belong to Group 8. Basically, Group 8 include sretrievers, flushing dogs and water dogs.

Also known in Spanish as “cobradores de caza”, this section of dogs is characterized by animals that retrieve prey for hunters. They were created to remain under control, mark their defeated prey, collect “blind” payments and, of course, follow their owner’s orders. Among the six different breeds of retrievers, we find:

Labrador retrievers are one of the most popular pets in the world, and have their origins in Canada. As for their behavior, they stands out for being intelligent, kind, energetic, affable and gentle. They are excellent companions, are perfect with children, as obedient as can be and extremely friendly. Labrador Retrievers can have black, brown or sand-colored coats. They tend suffer from hip or elbow dysplasia due to obesity (something that is very common in this breed).

The Flat Coated Retriever emanates from the United Kingdom, and the first specimens were born in the 19th century. It is believed that their ancestors were from Canada. Even though this breed was on the verge of disappearance during World War II, it gained popularity in the sixties due to canine sports and mountain expeditions. They are somewhat confident, enjoy pleasing their owners, are excellent companions and have a firm bark. They sport black fur, that is dense and shiny.

All of the dogs included in this section either have small or medium builds, and have large, dangling ears. Their main purpose is to assist in bird hunting: first they find the birds and then they deliver them to the hunter. There are a total of nine breeds of flushing dogs, among which we can mention:

Originally from Wales and used to chase redfish, the English Cocker Spaniel’s ancestors are from Spain, and their offspring are from the United States. They are athletic and strong, have a compact body, a developed chest and muscular hind legs. Their ears are lobular and dangle as far as eye-level.

An English Cocker Spaniel’s coat can be one or more colors, such as  light brown, white, black, etc. They are very intelligent, resistant and alert, and do not like being left alone at all. They bark a lot when they are not accompanied. These dogs are ideal if you live in a city apartment.

Another dog in group 8 from the United Kingdom has an almost square body, with a long tail, brown eyes and slightly furry ears. They weigh up to 20 kg, and their fur is red and white, and very soft to the touch. Welsh Sprinter Spaniels are extremely faithful, affectionate and active, and are somewhat reserved with strangers. They can be a bit clingy with their owners, and are characterized by being “deaf to orders” if they are not properly trained.

Within this section, there are eight breeds with woolly and curly fur that are used especially in marine areas. Of these eight, we would like to highlight:

Although these dogs are also in group 9 of the International Cynological Federation for being companion pets, the Poodle has physical characteristics that fit perfectly with those of water dogs. They emerged in the fifteenth century and were initially exclusively reserved for nobles and aristocrats.

Until the Renaissance, they were used to recover ducks and swans. There are four varieties according to their size (Large, Medium, Miniature and Toy). They are very active, playful and cheerful and are not easily distracted.

These dogs originate from Andalusia and, although they were used as shepherds and as boat assistants, it was determined that they have a place among water dogs because of their appearance. Their coats can be black, brown, white or beige, and have either one or two colors. Spanish Water Dogs are loyal, cheerful, obedient, courageous, industrious and balanced, with instincts for hunting, guarding and protecting.