Home » Breeds » The Anatomy of Greyhounds: Why Are They so Fast?

The Anatomy of Greyhounds: Why Are They so Fast?

This breed's physical traits play an important role to their insane speed. They can reach over 40 miles per hour. They're light, aerodynamic, have big strong paws, and their heart is bigger (proportionally) than a human's. 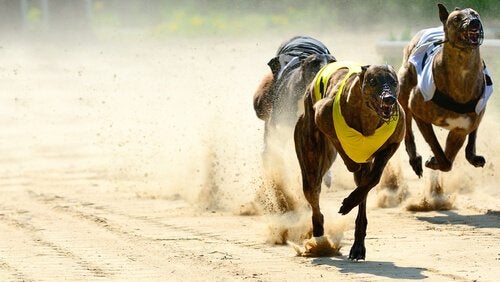 Greyhounds are known for being one of the fastest dogs out there. But why? Some people say it was they were used for hunting, but the truth is that it’s all in their anatomy.

The anatomy of greyhounds: why are they so fast?

At first glance you’ll notice their big paws, light weight, and long thin body. Just those traits alone would be enough for them to be faster by themselves, but there’s more.

Their weight isn’t the only reason why greyhounds are so fast. It’s also how their body is designed. It has an aerodynamic shape, and looks like it was made to cut through the air and reach high speeds.

Their long, small head and long legs also help them reach the speeds that they do.

Greyhounds proportionally have a bigger heart than any other breed. It’s even bigger than a human’s heart. Why is that so important? It can beat a lot faster and harder than another dog’s during a race, which why they such a good endurance and run so fast.

When your heart gets tired and can’t pump blood fast enough to keep up with the race, then you slow down. Basically, greyhounds don’t have this problem.

Similar to how their heart is bigger than average, greyhounds also have more blood in their body, which means they can circulate more oxygen into their muscles. It’s yet another thing that helps them last throughout any race.

Their paws might be thin, but they’re also long and strong. This helps them accelerate really fast during a race. If you watch a greyhound running from the side, you’ll notice it looks similar to a kangaroo. Their legs are so long that they can put their front legs behind their hind legs, like a springboard.

Greyhounds make this motion constantly when they run, which is how they reach such high speeds. It’s also how they can keep those speeds up for so long.

Their muscles also play an important to their speed. They contract quickly and powerfully. The proportions of their head to their body is small, and it helps them keep their balance while running at high speeds. Of course, their tail and neck help too.

A greyhound’s head is connected to their neck at a right angle. They can point it in any direction they want with just a light movement. A greyhound’s center of gravity can change just by making a slight turn to the left or right, the kind of agility other animals just don’t have. Not even other racing dogs have this ability.

Besides helping them keep their balance when their muscles contract, their tail also helps them arch their back to slow down and speed up. It’s the perfect length for those occasions.

So, greyhounds are fast because of their bodies. Their anatomy shows that they are designed to run very fast. That’s why they’re so common as hunting and racing dogs. No one has ever found, and probably no one will ever find a better breed for those things.