This dog breed is used by the Inuits for hunting and transportation. It's extremely tough and can withstand intense, arctic weather conditions. They make good guard dogs and they're also very friendly. 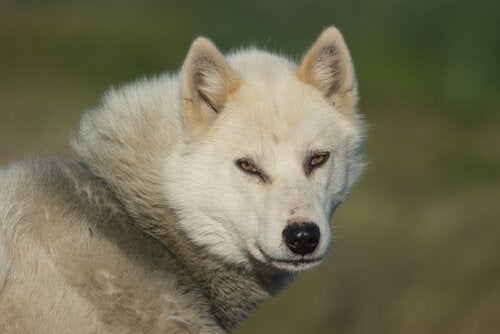 You’ve probably have noticed that My Animals talks about dog breeds you might never have heard of before. Is the Greenland Dog one of them? If so, then let us tell you everything we know about this amazing dog — are you interested?

Getting to know the Greenland Dog

The Greenland Dog is one of the oldest breeds in the world. The Inuit people are a group of native people who live in Arctic regions, and in this case we’re talking about the ones who live in Greenland. These people have used the Greenland Dog for centuries for hunting and transportation purposes.

These dogs are perfectly adapted for the cold, and people have always used them as sled dogs, although for some strange reason they’re the least known of all snow dogs. For some odd reason Huskies, Samoyeds, and Alaskan malamutes are all much better known.

The Greenland Dogs’ bodies are made to withstand the extreme conditions of the Arctic, probably even more so than those other breeds. They have an amazing resistance to cold and damp weather.

Their heads are mostly round, except for an arch at the top. They have a lot of space between their ears, which point up and are rounded at the tip.

Their eyes are round but almond-shaped at the ends, and they don’t bulge out or sink in, which gives them a deep, mysterious, but friendly gaze. They have a long snout and the fur on the rest of their body is usually a bit darker. This dog is flat and wide, and their darker fur is very noticeable. Their nose has a very chocolate colored, almost black.

They have a strong, deep chest, a straight back, and an overall appearance of strength and toughness. Their legs are straight, with strong muscles and bones. Their paws are massive, and seem big compared to the rest of their body.

Finally, they have two layers of fur. The inner layer is soft, and the outer layer is thick and smooth. This breed has a lot of different colors, though their chest is almost always white. Most of the time their other colors are shades of brown (cinnamon, beige, earthy, sandy…), but black is also an accepted color.

The Personality of the Greenland Dog

This breed has one special trait in common with a lot of Japanese breeds: it doesn’t bark. They communicate through howls, which are different depending on whether they’re expressing sadness or happiness. People from Greenland sometimes call their howl the “cry of the wild.”

They’re energetic, daring, and very mentally tough. They’re calm, friendly, and independent, which makes them ideal for a family, because they won’t attach to a single person. Plus, they’re great guard dogs.

One of their defining personality trait that defines these dogs is austerity. They never complain when they have a job to do, they’ll get it done no matter what.

How to take care of a Greenland Dog

These are really healthy, strong dogs. We don’t know of any specific diseases this breed has. The only thing they mainly need is a lot of daily exercise, because of their genetics.

These dogs need to be brushed often to get rid of dead fur. You also have to check their fur because being so long makes it easy for parasites to settle in. People have always used this breed as a work dog, but they also make great pets. Go ahead and find out for yourself!