This breed is so energetic and playful, your kids won't be able to tire them out. However, even with their friendly nature, they'll always try to protect you from danger. 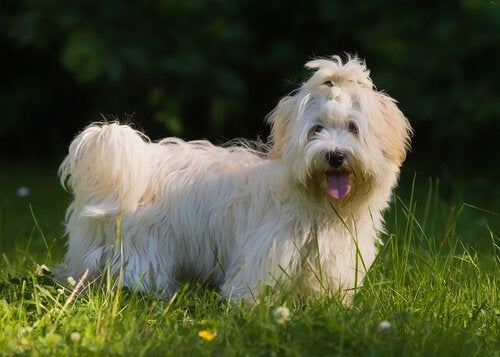 Everyone loves learning about new breeds, and today you can get to know about a Cuban dog. Did you know multiple breeds of dog originated there? Well, that’s the story of the Havanese, a wonderful little dog that makes an even better pet. Interested? Keep on reading!

The Havanese, an unusual pet

Its history and origins

Just as its name’s indicates, it might seem like this dog originated from Havana, the capital of Cuba that’s famous for having colorful houses and classic cars. However, this breed’s history actually began in the Mediterranean, in Spain in Italy.

It seems that these dogs were brought to Cuba on Italian ships not long after they were bred for the first time. So, why do we call them Havanese, and why do we see them as Cuban? Well, it’s due to their color being similar to that of the famous Cuban cigars.

However, the first ones the Italians brought over were white, and people called them “los blanquitos de La Habana” (the little white dogs of Havana). Later on, people crossed them with poodles, and that’s where their “Cuban cigar color” comes from.

Due to all of the political problems and the major crises in Cuba, this breed almost went extinct in the 20th century. Luckily some Cuban breeders living in the US have managed to keep them alive.

The physical traits of the Havanese

The first thing that stands out about these dogs is their fur. It’s long, silky, and there’s a lot of it. It’s usually very wavy, although there are some Havanese with straight fur.

This breed is considered to be small because they usually measure between 8-12 inches long, depending on whether they’re male or female. They’re also always shorter than they are long.

These dogs can weigh between 7.5-15 pounds. They have small bodies, but their paws are big and strong. They don’t look weak at all due to their very athletic appearance, which is obvious if you see them running.

Their heads are big in comparison to the rest of their body, and their cute, innocent eyes are one of the best things about them.

Havaneses have one layer of fur, and their accepted color is pure white, cigar, tobacco, red-brown, and even tawny if they have some charcoal-like spots. Spots are accepted unless they’re completely white.

The personality of the Havanese

These dogs are happy, active, and affectionate. They love to play and have so much energy that your kids won’t be capable of tiring them out! They don’t like to be alone and will always want your attention. These dogs are great for kids. even though they’re sweet and loving, they’ll fight to the teeth to protect their loved ones.

Their alertness can be a good thing, but it can also be a problem if they start barking too much. It’s important to socialize them at an early age in order to get them used to be around other people and pets.

Health and how to take care of them

The most common health problems for this breed are hip dislocation, cataracts, and otitis. Even though they’re full of energy, they don’t need much exercise. It’s enough just to take them on a few long walks every day.

These dogs absolutely need their fur to be well-taken care of. They will need a good brushing on a regular basis to prevent knots from appearing. As mentioned earlier, they love attention and don’t like being alone, so if you’re looking for an independent dog, the Havanese isn’t for you.

As you know, having a pet is a big responsibility, and you need to be able to provide for all their needs. In this case, Havaneses have emotional ones: are you ready to fulfill them?