The Kohana Cat, Also Known as the Hawaiian Hairless

Eye care is extremely important with this breed because they don't have eyelashes. 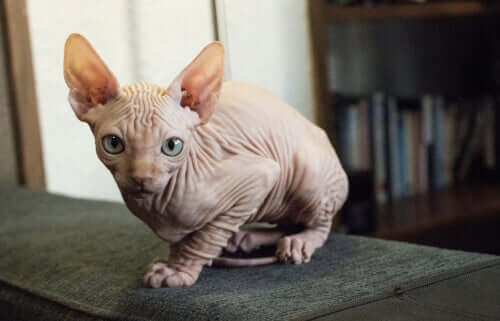 The Kohana cat is a breed of “hairless” cat. But, unlike other hairless breeds, this lack of hair comes from a specific genetic mutation. This is where the Kohana cat gets its rubbery, wrinkly skin.

The origins of the Kohana cat breed

The first documented sighting of a Kohana cat was in 2002, although there are lots of long-winded theories about their origins. An early theory was that they came from a wild breed of Hawaiian cats, some of which had undergone a genetic mutation. Most hairless cats have altered hair follicles. This breed simply has no follicles at all.

But, later on, other people formed hypotheses that it happened because they were a cross between the Hairless Donskoy Sphynx and the Canadian Sphynx. Other people thought it was just an offshoot of the Canadian Sphynx. In the end, DNA tests showed that the Kohana cat had the same genetic mutation as the Sphynx, but other genes were involved too.

However, this breed is seen as extremely minor nowadays because of its trouble reproducing. There are also some cat clubs and experts in taxonomy, genetics, and zoology who don’t even see it as a new breed. According to them, there are mutations that create new hairless cats about every fifteen years.

This breed has a broad, muscular body. Thanks to the lack of hair, it’s easy to spot that quality, along with all the wrinkles. They can weigh anywhere from 6-13 pounds, with back paws that are much longer than their front paws. This gives them a very peculiar, unique, way of walking.

A Kohana cat is usually a cream, or pinkish color because of its naked skin. There have also been some black and white ones.

This is an intelligent, affectionate, and energetic breed, which means it needs lots of attention. The good thing is that you don’t have to worry about spending time on brushing it (although you do have to wash it!), unlike you would with other breeds. This is also good for the cat itself, because it doesn’t eat any of its own hairballs.

Dental care is always a major part of keeping a cat healthy. You can’t forget to take care of its gums, either. A build-up of plaque and other mouth bacteria can lead to some serious illnesses. Good hygiene and vet-approved food are the best ways to maintain your cat’s oral health.

It’s also crucial to make sure its eyes are healthy. Kohana cats don’t have eyelashes, which means that they’re more vulnerable to unhealthy particles, which can lead to pink eye. The best way to keep their eyes healthy is to soak a cloth in saline solution and brush out any crust or other particles around their eyes.

Advantages of this breed

Unlike most other breeds of cat, this one is a great option if you’re allergic to cats. That allergy is to a cat’s hair, but this one doesn’t have any, so you don’t have to give up on having a feline friend anymore! Not having hair also keeps it from getting everywhere, and your cat throwing up after it spends hours licking itself.

Plus, because it’s an entirely indoor breed of cat, you won’t have to worry about it bringing in any illnesses, or getting lost.

Kohana cats may seem fragile at first glance, but if you give them the proper care, food, and affection, they can live up to 17 years. Energetic, affectionate behavior is the best indicator of how it’s doing. In other words, if it’s happy, it’s healthy!

Hypoallergenic Dogs: Myth or Reality?
This article will addresss the idea of hypoallergenic dogs and if they actually exist. You will find some clues to the best dogs to have. Read more »
Link copied!
Interesting Articles
Cats
The Wild-looking Serengeti Cat