The Korat Cat: A Beautiful Breed

Also known as Si sawat or "good luck cat," is a completely natural beautiful cat breed, which humans didn't play any role in its evolution. 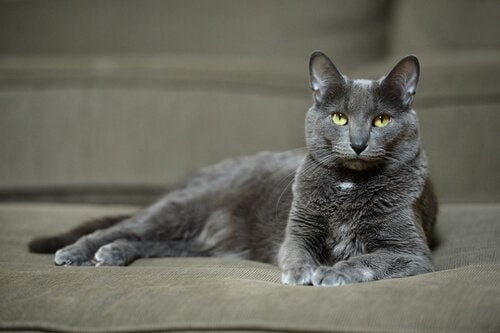 This elegant cat’s hind legs are longer than its front legs, a big nose, and a heart-shaped face. That’s the Korat Cat, and its part of a group of cats known as the “blue” breeds. Intelligent, affectionate, and playful, this cat–that originated from Thailand–is still not very common or well-known in the Western world.

The Korat, a cat associated with good luck

This cat breed’s name comes from a province of ancient Siam, which is part of modern-day Thailand. These blue cats were all over the place in Cao Nguyen Khorat long before the 14th century. However, that was the first time they were ever mentioned in documents, and of course, it was for their beauty.

Even with all its popularity and value in Thailand and other Asian countries, the Korat didn’t make its way to the West until most of the way through the 20th century. It came to the US for the first time in 1959, and didn’t make it to Europe until more than a decade later.

Also known as Si sawat or “the good luck cat,” this is a completely beautiful cat breed, which humans didn’t play any role in its evolution.

The Korat breed is like pure harmony in the form of a cat. Originally from Thailand, this gorgeous representative of the “blue” breeds is intelligent, playful, and extremely affectionate with its owner.

This beautiful cat breed has a soft, even color pattern and is medium-size. Here are some of its other physical traits:

This cat breed is also extremely good at climbing and has an amazing sense of smell. They usually weigh somewhere between 6-8 lbs. and they’re usually between 8-14 inches tall. Females tend to be a little bit smaller and thinner than males.

Affectionate and calm, it’s the kind of cat has no problems being in an indoor setting. It’s very sensitive to loud noises and quick, sudden movements. So, even though it’s extremely affectionate, especially with its owner, it can be a little risky to have around strangers and children. It doesn’t always get along so well with other cats either.


It’s a playful, talkative breed. It has a soft, pleasant-sounding purr. If it wants something, it’ll always find a way to let its humans know. Since they’re so intelligent and intuitive, Korat cats are extremely good at finding hidden objects.

The kind of care the Korat Cat needs

Because of its short hair, this cat doesn’t require much care, and only needs a good brushing every once and a while to get rid of its dead fur. Besides that, it’s just like with any other pet. It needs a healthy, balanced diet and all the necessary veterinary treatments like vaccination and de-worming.

It’s usually a very healthy breed, with an average life expectancy of 16 years old. However, it’s still best to be safe and do blood work to see if it has a genetic disease called gangliosidosis.

This is a strange disease that causes neuromuscular problems and generally shows up in animals when they’re four months old or under. But if your Korat Cat is only a carrier, they’ll be able to live a completely normal life.