There are a few breeds that started in Spain that stand out for their amazing sense of smell and their determination, toughness, and speed. 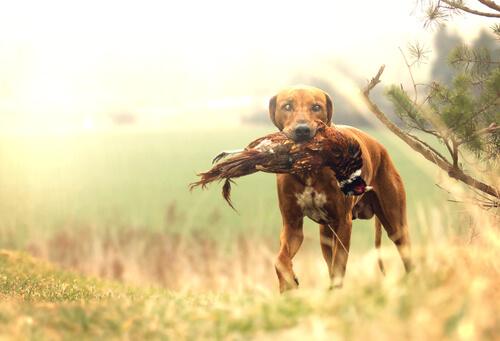 Despite all the campaigning against it, there are still lots of people who like to hunt in countries like Spain, and elsewhere. Many of these people rely on bringing a hunting dog along with them. Today, you can read about the best hunting dog and some others things that are high up on the list.

Known in Spanish as a podenco, going hunting with a Warren Hound is pretty much a Spanish tradition. These dogs are really not well known outside of Spain, but they have an immense talent for hunting. That’s not just because of their powerful sense of smell, but also because of their toughness, speed, and determination.

The Warren Hound is a very old breed, from the Mediterranean Basin. Their tough, rough and tumble body makes it easy for them to maneuver around hard terrain and bad weather.

In Spain, there are three sub-breed worth mentioning: the Andalusian Hound, the Ibizan Hound, and the Podenco Canario (from the Canary Islands). They’re commonly called “rabbit dogs” because of their skills in hunting rabbits and other rodents. These dogs are brave, resourceful, can hunt alone or in a pack, and guarantee good results.

Warren Hounds really stand out as the best hunting dog in Spain, but there are also some other breeds with great hunting instincts. Below, there is a list of other good hunting dog breeds:

Spanish Scenthounds generally work by finding prey and “herding” them towards the hunter. So, they’re more like “helpers” than true hunters. They can also help their owner figure out where prey is located and spot changes or danger in their surroundings.

The English foxhound is a dog bred specifically for small-game hunting. They’re strong and tough, but also quick and agile, with highly developed senses that help them chase after prey. They’re extremely energetic and relatively independent, and they’re very loyal to their owners.

Thanks to these qualities, the English Foxhound is definitely one of the best hunting dog breeds. If you want to keep one as a household pet, you need to put extra effort into training and socializing them to avoid behavioral problems like barking or chewing.

Basset Hounds originated from France, and are a very traditional hunting dog breed. They have an incredible sense of smell, and can easily track a scent. Their loyal, persistent personality also make them a great companion for a long journey.

Unfortunately, they’ve gotten a bad reputation as being stubborn and hard to train. Basset Hounds do have a strong personality, but they’re also extremely intelligent and receptive to training.

Out of all dog breeds, Bloodhounds have the most smell receptors in their nose. Of course, that makes them the best at tracking a scent. Historically, people have used them for big-game hunting, because they’re large, heavy, and very tough.

Greyhounds are universally recognized as the fastest dogs in the world. They also have great hunting instincts. But because people often used to exploit them, most European countries have limited or banned the use of Greyhounds for hunting.

All dogs in the Setter family are great at hunting and following a scent. But their real talent is as pointers. In other words, they “point” towards the prey and help their owner find it. The English Setter is a particularly good hunting dog due to their strong sense of smell and extreme toughness.

As you might have guessed from their names, Pointers are also pointing dogs. A lot of experts see them as the best all-terrain hunting dog breed because of their physical and mental capabilities.

Link copied! Next
Interesting Articles
Dogs
The Causes of Epilepsy in Beagles