How Does Catnip Work?

Catnip has a narcotic effect on cats, which makes them more active than what is normal for a cat. 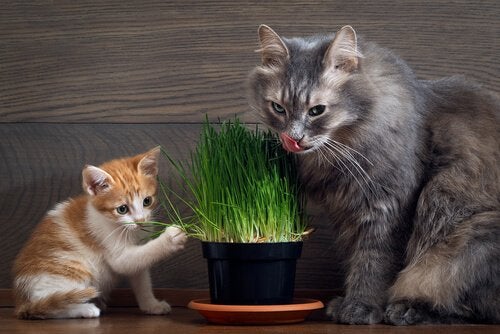 They are independent and quiet, easy to train, and require little care. In addition, they adapt well to small spaces, improve their owners’ well-being, and are very fun. Because of these and other reasons, hundreds of people choose cats as pets. They give their owners affection, and in turn, the owners repay them by giving them catnip. This plant is delightful to a cat.

This plant, which is similar to mint and peppermint, has a narcotic effect on cats. When they smell it, they begin to rub against it and experience euphoria. They may also lick it or pretended to devour it. Then, in a matter of seconds, they start running or jumping all over the place.

Considered a natural stimulant, this herbaceous species unleashes strange behaviors in these animals, but none that impact them negatively. Some cats wallow on the ground, scratch, kick, and play while meowing. Others relax and stare as if they were hypnotized. It’s normal, and they love it.

Its scientific name is Nepeta Cataria. It belongs to the labiatae family, which is composed of 250 genera and 7,000 varieties, including sage, mint, and the mastranto flower. It originates from North Africa and the Mediterranean. From there it spread to several regions of the world, including temperate zones.

Although its most common name is catnip, it is also known as cat mint, cat herb, cat basil, and catswort.

It has an alleged expectorant action and it’s effective for soothing stomachaches and accelerating menstruation. Therefore, it was very popular during ancient times, so much that wild fields of it are still found in Europe and North America.

How to identify catnip

One of its peculiarities is that it can live for several seasons because its root system absorbs water and nutrients from the soil. In warm climates, it grows continuously and usually measures 40 centimeters. Its leaves grow on a stalk with leaves on either side, which have softly jagged edges and are furry on the back. Its stem is grayish and furry.

From this stem sprout small white or lilac flowers in a pedunculated spike. They form bouquets that open between June and August. Its characteristic trait is its particularly mentholated aroma that seduces cats.

What does the plant have that attracts cats?

Catnip has an active component called nepetalactone, which apparently simulates cat pheromones. That is why it causes behaviors similar to those of the mating season.

The molecular particles are released into the air and quickly enter these animals’ nostrils. Then, it causes reactions that can last from 5 to 15 minutes, and can be repeated 2 hours later.

Not all felines respond to the effects of nepetalactone, but most do. Scientists say that two out of three cats, regardless of breed or sex, succumb to this plant’s “charms”.

If a cat doesn’t response to the stimulus, it can be due to hereditary factors. In other words, it’s possible that a cat doesn’t have receptors that are sensitive to the plant’s odor. In fact, you can’t determine catnip’s effects on a cat until he’s six months old. Also, people say that the emotions catnip arouses can diminish with a cat’s age.

Are there any negative side effects to ingesting catnip?

Consumption itself isn’t dangerous. Some cats have had an upset stomach after heavy binges, but that’s unusual. Others, mainly males, become aggressive because of the plant’s connection with coitus, but moving the cat away from the plant will be enough to stop this behavior.

No matter what, moderation plays a good role to prevent problems. Although the animal’s health isn’t compromised, you should supervise him, because his behavior could become excessive. It’s best to close all doors and windows, and avoid contact with children, until the cat returns to its normal state.

5 Benefits of catnip for felines

Catnip’s benefits have been endorsed by experts, and it’s used to make toys and edible products. These range from stuffed animals to treats and snacks. There are also powders, seeds, dry leaves, and oils that you can place on your cat’s belongings. A small dose will be enough to provide these benefits:

In short, keeping your pets happy is a must and you can do that by using catnip. It literally makes them jump for joy!