Causes of Halitosis in Dogs

Although many people might not think so, halitosis in dogs is not normal. In fact, it's a symptom of an underlying health problem. 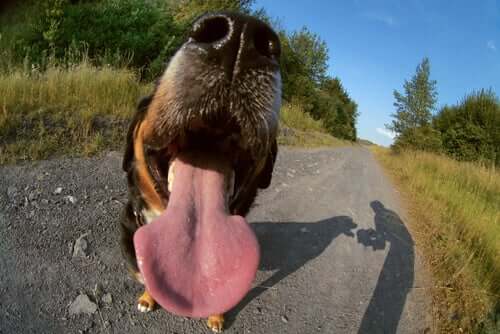 Many people consider halitosis in dogs to be a natural thing. They think it’s completely normal for a dog to smell bad. But this is far from the truth. Sure, you can’t expect your dog’s breath to smell minty fresh, but it should at least smell neutral. If your dog is suffering from halitosis, there’s an underlying problem.

The vast majority of conditions that cause halitosis in dogs are actually quite dangerous and can lead to a gradual deterioration of your dog’s health. By the time other symptoms appear, it may already be too late.

If your dog’s breath smells bad, go to see a professional for a dental inspection. It’s important to find the root cause as quickly as possible.

Tartar build-up may cause halitosis in dogs

Tartar is a bacterial plaque that forms on the tooth as the result of the deposit of minerals. As well as causing strong halitosis in dogs, it can also damage adjacent tissue, such as the gums. This can lead to gingivitis and infections that also cause bad breath.

Furthermore, because of its mineral nature, tartar can affect other organs such as the heart, kidney, or lungs, leading to heart disease, kidney stones, and other problems.

Oral neoplasms are fairly common in dogs, and they are benign, unlike in cats, where they can develop into malignant tumors. These tumors can appear anywhere in the mouth, such as the lips, hard or soft palate, or gums. Occasionally, a malignant carcinoma can develop.

Depending on the tumor, the dog could experience mild discomfort or stomatitis – inflammation of the oral mucosa – with halitosis. Your dog may also stop eating because of the pain, and this could lead to anorexia.

Candidiasis is a fungal disease that affects both birds and mammals, including humans. This is caused by the yeast Candida albicans.

When this infection affects a dog’s mouth, it can lead to a number of symptoms, such as:

Being a fungal disease, it requires very specific treatment. This should always be prescribed by a vet, and specific tests are needed to diagnose the infection properly.

One of the most serious, yet common, mouth conditions for a dog is periodontal disease. This condition begins with a build-up of tartar on the teeth which, in turn, causes gingivitis or inflammation of the gums. This stage of the disease is completely reversible with the right treatment.

However, shortly after this, periodontitis appears. This will cause your dog severe pain and lead to further widespread infection in the mouth. Your dog could even stop eating. They will begin to lose gum tissue and even teeth.

Chronic kidney disease can cause halitosis in dogs

Chronic kidney disease is defined as the presence of problems with the structure or functioning of one or both kidneys which have lasted for at least three months. This is a serious condition and can be fatal if left unattended. There is a number of possible symptoms:

Furthermore, dogs that suffer from this disease usually develop heart problems, and in many cases, these problems are caused by poor oral health. So, taking care of your dog’s mouth is a very important part of being a dog owner.

Do Allergy Tests for Dogs Exist?
In this interesting article, you'll read all about allergies in dogs and if allergy tests for dogs exist. Read on to learn more! Read more »
Link copied!
Interesting Articles
Oral Hygiene
Tartar in Dogs: 6 Consequences

Oral Hygiene
Feline Teeth - What You Should Know about Them

Gum disease in dogs, also known as periodontal disease, causes the weakening and eventual loss of the structures that support…

Oral Hygiene
The Importance of Your Pet's Dental Health

Your pet's dental health is very important in order for your pets to have a high quality of life. Approximately…