The Moving Story of a Dog That Protected His Friend

The moving story of a dog that protected his friend 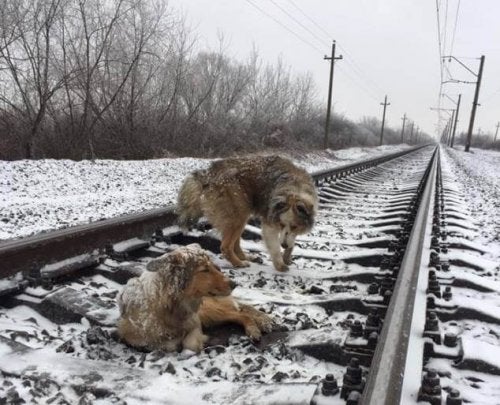 There are many stories that we read or hear about with courage, heroism and solidarity of dogs towards people. These will undoubtedly move us. But even more than being moved, we are struck by remarkable news stories about saving a pet or helping another animal.

In this article, we will tell you the moving story of a dog that protected his friend. Do not miss it!

The story of a dog that protected his friend

Winter can be deadly for stray dogs. Especially in places where snow is a daily occurrence. This story takes us to the city of Uzhgorod, in Ukraine. It will make us think about the generosity and love that animals give without expecting anything in return.

A dog stayed next to his dog friend, who was also living on the street, to prevent her from being killed by a train. She was wounded and had taken refuge alongside the tracks, without understanding that several trains passed by there.

The dog huddled next to her for two days. Each time a train traveled along the tracks, he would get on top of her in order to protect her. The dog was too weak to get up and walk on her own to save herself. Thanks to the warmth and shelter of her friend, she was able to survive.

Some passersby approached the dogs, but the healthy dog barked at them to scare them away. Finally, the pair of dogs were rescued by a man named Denis Malafeyev. First, Denis took some pictures and filmed a video that made our hair stand on end. On the way to the vet in the rescuer’s car, the dogs remained huddled together.

Denis told the story in the following way:

“I was told that two dogs had been lying on the railway line for two days. When I arrived, I realized that the female was injured and could not move. The male defended her from the people who tried to rescue them. At that time, a train was approaching. Then, the animal approached the injured dog and lay on top of her. They pushed each other’s heads down so they were not in the way of the trains, which is how the dog protected the injured dog for many hours. “

Luckily, the dog only had a few injuries. After being examined by the veterinarian, both were happily reunited with their owner.

The dog that saved another on the road

The story of the dogs on the train tracks is really touching. But, of course, there are many more stories that are similar. For example, we will tell the story of what happened to a dog that rescued another dog from certain death in the middle of the road.

A dog noticed a wounded dog in the middle of a highway and crossed the lanes of traffic until he got close to the injured dog. The dog then began dragging the injured dog, holding on to its front legs. Finally, the two animals reached the emergency lane, where they sheltered from the cars that passed quickly by on the highway.

Another story that has caught our attention and demonstrates the love of dogs towards other animals. Two dogs were in a canoe, lost. It is likely that their owner fell into the water. Or possibly the dogs were playing on the shore when the boat accidentally became untied from the dock …

The truth is that the dogs were desperate, and began barking and trying to seek help. A third dog then appeared on the scene. A black Labrador jumped into the water without fear and began swimming to where the canoe was located in the water. The Labrador stopped the current from dragging the boat downstream. Using his snout, the Labrador pushed the boat to the shore and then pulled the rope with his mouth, to bring the boat to safety.

Source of the images: husmeandoporlared.com

Link copied!
Interesting Articles
Mental Health
What If Your Cat Sleeps in the Litter Box?