Dirofilariasis in Dogs: treatment and prevention

This disease is common, easy to prevent and treat, and can potentially cause serious heart problems. 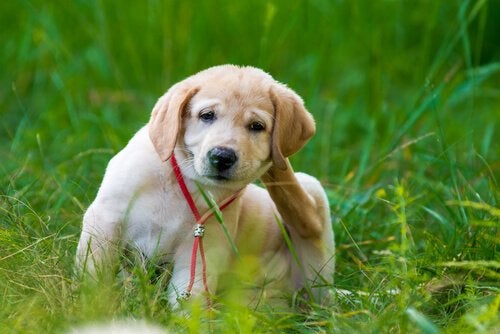 Dirofilariasis in dogs comes from a worm species called Dirofilaria. This parasitic disease is easy to treat and prevent, but it could be very dangerous for your dog. Read on to find out are you need to take about taking care of it.

What causes dirofilariasis in dogs?

One of the most commonly known forms of this infection comes from Dirofilaria immitis. You’ll usually hear it go by the name of “heartworm.”

There are two forms that are especially common: Dirofilaria immitis  (in the United States) and Dirofilaria retens (in Europe).

Ticks and mosquitoes are the most common carriers and transmitters of this disease, and mosquitoes are especially likely to transmit it. One of the big concerns of these diseases is that they can also infect humans in some cases.

When these insects ingest infected blood, they can spread microfilaria, which enters into a dog’s bloodstream and grows in its pulmonary artery.

What types of dogs does it affect?

Dirofilariasis mostly occurs in dogs between the age of 3-6 years old. It never shows up in dogs older than 10 years old. It’s also especially common in short-haired male dogs, so you have to take special preventive measures for them.

Dirofilariasis is also common in hunting dogs, like Lyme disease, ticks are a major transmitter of it. These types of dogs spend a lot of time outside and in the woods. There, they’re much more likely to pick up ticks.

It also depends a great deal on where you live. Take extra care of your dog if you live in an area with mosquitoes and ticks, especially during the spring and summer.

The adult Dirofilaria cause endarteritis and end up taking all the light, which reduces the diameter and elasticity of blood vessels. They can also cause high blood pressure, heart failure, liver failure, and superior vena cava syndrome,

The larvae can also cause hypersensitive pneumonitis and pulmonary embolisms. Most of the serious symptoms involve the heart, so your dog will get tired very fast.

The only way to get a clear diagnosis is from the vet. They’ll do bloodwork and staining to see if your animal tests positive for these worms. If you live in an area where they’re common, it’s best to do frequent checkups in the hotter months of the year.

The important thing about this disease is to treat the symptoms. In order to treat them, you’ll need heparin, diuretics, and other medications, along with a proper diet. Extremely serious cases could even require surgery.

Your vet will prescribe ivermectin to get rid of the microfilia–it’s the best way kill the parasites. With adult dogs, the main goal is to treat the symptoms, with the help of medications like levamisole.

Another way to prevent this disease is to frequently check your dog for ticks and remove them right away. If your dog has been bitten, it’s best to see your vet, especially if you’re in one of the areas where dirofilariasis is common.

For the most part, following these tips and keeping your dog current on their vaccinations and dewormings should be enough to keep them safe.