Dog is Saved Before Being Put Down— Learn How!

We all worry about the health of our pets. Luckily, even in drastic cases, there is hope. 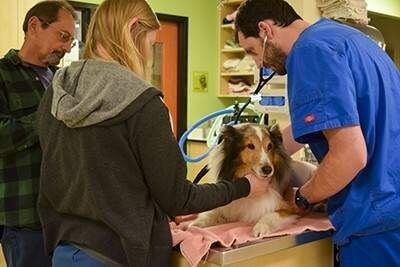 When a pet comes home for the first time, it quickly gets used to us and vice versa. It becomes part of the family, just like any other family member. For those that love animals, nothing could be more painful than having to prevent the suffering of their friend by choosing death. This is why I want to tell you about this news story of a Collie that was saved from being put down at the last minute.

This is one of those miracles that rarely happens, but it is true. We’ll tell you the story of Ollie, a herding dog. How did he end up almost being put down? And better yet, how was he saved from it?

Ollie, the dog that had to be put down

Ollie is ten years old and lives in Portland, the United States, with his owners, Al and Joelie Meteney.

Like all dogs, Ollie was happy and loved going to the park, running and playing with his owners and jumping around. He adored going on excursions that his owners would always take him on with them. All that to say, Ollie was a normal and happy dog, a very happy dog.

One day like any other, his owners packed some things in the car and Ollie watched them hopeful to be called. When he heard his name he thought – yes, we are going on an excursion! They were headed to Oregon, a beautiful place where nature is the protagonist, a place Ollie loved.

In spite of how much Ollie and his family enjoyed their time, on the way home the nightmare began. Suddenly the dog started to lose mobility. At first they might have assumed that the stiffness was due to the long walk, but the animal was in great shape and that wasn’t a possibility.

First it was just a little hard for him to walk. But, little by little things got worse . He started struggling to eat. Every day, he walked with more difficulty. And, he ingested less food and with greater effort. His owners thought it best not to delay and go immediately to the doctor.

They did urine tests and blood tests in addition to other exams. And, the results were frustrating. Nothing came up, but Ollie’s health was going from bad to worse. A moment arrived in which he stopped eating because he could no longer move nor go to the bathroom.

When the Meteneys returned to the veterinarian, this they were certain of: they would have to put him down. Ollie was suffering a lot and his family too – it was the best thing.

The family remembers the heartbreaking news and were totally inconsolable, but it was the best thing for everyone.

The fateful day arrived, the moment of euthanasia

Ollie’s owners, resigned, went to the clinic trying to take in the fact that  they were never going to see their little guy again. The entire medical team was ready. The scene was sad, the family was crying and the nurses couldn’t resist joining them with tears.

Just before the euthanasia, one of the nurses was saying good-bye to Ollie and petting him, when she noticed something strange behind the animal’s ear: a lump.

They looked at it carefully and there were some blood stains around the ear – it was a tick! The blood stains allowed them to see that the parasite had been a guest on Ollie’s body for a long time, feeding on his blood and damaging his nervous system.

The doctors offered a new solution to the family: they would remove the tick and give the animal three days to see if he would recover. Although it is not common, ticks can cause paralysis in the animal and the vets didn’t want to ignore this fact. And thank goodness! Ollie didn’t need three days. After removing the tick he rested a few hours and at night he was able to return home.

He totally recovered that very same day. And, he was jumping around and scratching the door to go outside. Basically he was saved from being put down by a hair!

Always ask for complete analyses and checks for your animal when he is sick. This story does not have to be an isolated incident and you, too, could save your pet’s life.

Source of the first image: www.20minutos.es

Illnesses and Treatment
Characteristics of Displaced Abomasum in Cows