Lupus in Dogs: Causes and Symptoms

Lupus in dogs belongs to a group of immune system disorders. In this very interesting article, learn more about this condition. 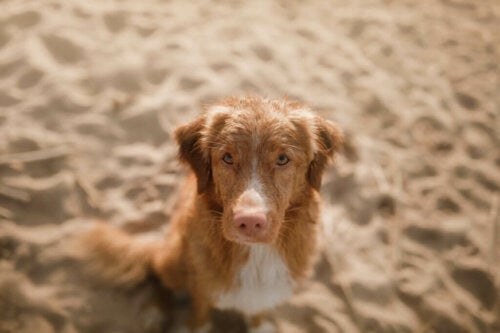 When you hear that lupus in dogs is an autoimmune disease, you may that confusing. In this case, you must remember that the canine body (just like the human body) has an immune system that protects it from foreign invaders that can cause disease and infection.

In the case of the appearance of an autoimmune disease, the immune system mistakenly attacks the body, causing a serious pathology. This happens when immune cells can’t distinguish between normal healthy cells and foreign cells. As a result, they try to destroy normal tissues.

The possible causes of autoimmune diseases

Currently, the causes are unknown. Nevertheless, there are theories about the influence of genetic or dietary factors or environmental pollutants. In fact, UV exposure is believed to be a predisposing cause or trigger for autoimmune skin diseases in some dogs.

What experts do know is that autoimmune diseases can affect a single system or multiple body systems. Thus, they can affect the skin, connective tissues, nerves, muscles, the endocrine system (the system that controls hormones and other chemical substances), red blood cells, or the digestive system.

In an autoimmune disease, such as discoid lupus erythematosus in dogs, the immune system mistakenly attacks and causes a serious condition.

The classic example of an autoimmune disease that affects multiple systems is systemic lupus erythematosus (SLE), commonly known as lupus. Lupus is often called “the great mimic”, because it can mimic almost any other disease. For this reason, you’ll need to take your dog to a veterinarian for proper diagnosis and treatment.

SLE can affect almost any body part and the symptoms will vary according to the affected organs. It can be fatal.

The signs of systemic lupus erythematosus can be acute (sudden onset) or chronic, generally increasing and decreasing. Chronic lupus in dogs manifests with alternating remission and relapse periods.

A fluctuating fever that doesn’t respond to antibiotics is one of the classic clinical signs of SLE. Leg stiffness or shifting leg lameness is also frequently reported.

Other clinical signs may include blood disorders, such as hemolytic anemia, thrombocytopenia (low blood platelet count), and/or leukopenia (low white blood cell count), or dermatitis. SLE is considered a more common cause of autoimmune skin disease in dogs. It’s rare in cats. Dogs or cats with SLE shouldn’t be vaccinated.

Discoid lupus erythematosus (DLE) is another autoimmune skin disease that affects dogs. It’s rare in cats. Another common name for this condition is “collie nose,” although it can appear in many breeds. DLE most commonly affects Collies, Shetland Sheepdogs, German Shepherds, Siberian Huskies, and the Brittany.

Experts believe that sunlight exposure (UV radiation) may be a potential cause or trigger. In most cases, affected dogs lose pigmentation around the nose. Nevertheless, it can also affect the skin around the lips, eyes, ears, and genitals.

DLE can transform the surface of the nose from its normal texture and make it look smooth, flat, and shiny. Ulcerated sores can also appear.

Some dogs find the disease irritating, while others seem unaffected by it. Experts believe that DLE may be a less severe variant of systemic lupus erythematosus, since it doesn’t become systemic. In fact, experts consider it a relatively benign autoimmune skin disease.

If your dog continually has paw and claw issues, they may be suffering from a condition known as symmetrical lupoid onychodystrophy (SLO). This is an immune-mediated condition that affects a dog’s claws and paws. Experts consider it a type of lupus. Therefore, it can’t be transmitted to other animals or humans.

Although there’s no cure, there is treatment. In some cases, symptoms disappear with proper supplementation with little or no relapse. Other cases are more chronic and will require lifelong treatments.

Symptoms of symmetrical lupoid onychodystrophy (SLO) can include progressive claw shedding over several weeks or even months. Also, this problem causes constant pain.

There may be swelling of claw folds, inflammation at the base of the claws, pain, lameness, and bleeding from the affected paws. In most cases, it affects more than one claw or paw.

Some dogs are at a higher risk of developing SLE. The disease tends to appear more frequently in middle-aged females. The most affected breeds include Afghan Hounds, Beagles, German Shepherds, Irish Setters, English Sheepdogs, Poodles, Shetland Sheepdogs, and Collies.

In short, early detection of lupus in dogs is extremely important. If left untreated, the complications from autoimmune disease can be serious. It commonly affects a dog’s entire body. These characteristics can make diagnosis and treatment very challenging and complicated.

Skin Irritation in Dogs: How to Treat It at Home
Dermatitis is one of the most frequent canine skin conditions. Read today's article to find out more about skin irritation in dogs. Read more »
Link copied!
Interesting Articles
Health
10 Signs that a Dog is Dying