Meet Rowdy, A Dog Who Has Gone Viral 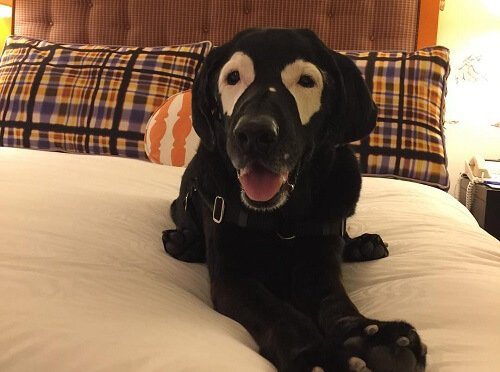 Rowdy is an absolutely normal dog except for one minor detail. He is a black Labrador with two white spots around his eyes, which are caused by the vitiligo.  At the time, this animal does not go unnoticed on social media due to his unique features. He is being used to raise awareness of the disease and especially help children with this medical condition.

Here is how Rowdy became famous on social media

Rowdy’s fur was completely black two years ago. Suddenly, white spots began to appear on his face and they did not stop growing. After checking with several veterinarians, they eventually concluded that Rowdy has vitiligo, a mild medical condition that causes skin and fur depigmentation.

So, this little animal began to catch the attention of everyone who came across him.  People would even ask if his face was painted to give him that “masked” effect.

This is the story of Rowdy, the black Labrador who caught everyone’s attention on social media due to the white spots surrounding his eyes. In fact, the dog helps spread information and raise awareness of vitiligo, the medical condition he has.

Rowdy, a dog that helps raise awareness of vitiligo

The good news is that Rowdy’s distinct look of his eyes being surrounded by white fur, did not go unnoticed on social media. In fact, he is making an effort to inform people about vitiligo and to help people who have it, especially children, in order to learn how to accept and live with this medical condition.

So far, there is no cure for this medical condition. Likewise, while it does not cause any physical harm — except for being sensitive to the sun — many people may be affected by seeing themselves with depigmented skin.

This beautiful black Labrador is already 14 years old, and is experiencing some ailments due to his old age.  He is greatly cherished by his human family, the Umberhowers. He lives with his masters in Canby, Oregon (USA). However, his fame doesn’t stop growing on the internet.

He has accounts on Instagram, Facebook, Twitter and YouTube, which do not stop attracting new followers. He even also has his very own web page. Thus, Rowdy has become an informal ambassador for the American Vitiligo Research Foundation (AVRF).

Vitiligo occurs when the body produce antibodies against cells that produce the pigments in the skin. It can take place in certain dog breeds. However, some breeds are more likely to have it than others, for example:

Additional information on vitiligo in dogs

Even though this medical condition is harmless, white spots do appear on the skin and fur. The most likely affected areas are:

It is a completely asymptomatic disorder and its causes are still unknown. In regard to humans, vitiligo is believed to be an autoimmune disease.

Despite his old age, Rowdy continues living a happy life, without any problems caused by the blemishes on his face. Likewise, he still helps people with this medical condition learn to accept their symptoms. Once again, dogs help humans. In one way or another, dogs always benefit us. Most of the time, we humans do not respond in the same manner.

That’s why it is important not to forget to constantly treat dogs with the complete respect and love they deserve, and protect them from every kind of abuse.