More and more people are opting for plant-based milks. But what benefits do they have over traditional cow's milk? 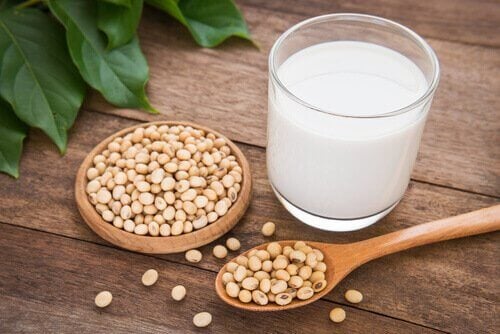 Whether because of allergies, lactose intolerance, or for ethical reasons, more and more people are buying plant-based milk as an alternative to dairy. Today, we’re going to tell you about the different plant-based milks out there, and their health benefits.

4 plant-based milks as an alternative to dairy milk

Soy milk is basically a combination of soy extract and water. The amino acids in soy make it very easy to digest, so it’s a great choice for people with sensitive stomachs. You can even get it sugar free, or in flavors like vanilla, coconut, and chocolate.

It’s also one of the most nutritious plant-based milks. It contains lecithin (which helps prevent arteriosclerosis), B vitamins, calcium, and phosphorus. The protein in it also helps calcium get to your bones, which is a big part of osteoporosis prevention.

Almond milk is another great plant-based alternative to dairy. It’s made of almonds, water, and usually some kind of sweetener. It also has up to 50% of your daily value of vitamin E. Plus, it has 1/3 less calories than an average glass of 2% fat milk.

The only disadvantage to it is that it’s low in protein. Soy milk and cow’s milk both beat it here.

All you need for rice milk is boiled rice, brown rice malt, and starch. It’s especially good for people with allergies because there’s no soy, nuts, or gluten in it.

Compared to soy and cow’s milk, rice milk is high in carbohydrates and low in calcium and proteins. It’s also too watery to be a good milk substitute, especially for cooking with.

Coconut milk is the most similar to dairy milk because of its texture. Its flavor also makes it great for desserts. Plus, it has no soy or gluten, and has a lot of potassium.

Did you know all these things about plant-based milk before? Maybe this was just the push you needed to make the switch to one of them.

A Dog Adoption Campaign Run by a Milk Company? Believe It!
Now here's a quite tasty bit of news. A brand of organic dairy products and an animal protection organization have teamed up to launch a dog adoption campaign. Read more »
Link copied!
Interesting Articles
Illnesses and Treatment
How to Treat and Moisturize Calluses in Dogs?