Acral lick dermatitis most commonly appears on a dog's front legs because that's the area that has the most contact of the dog's tongue. 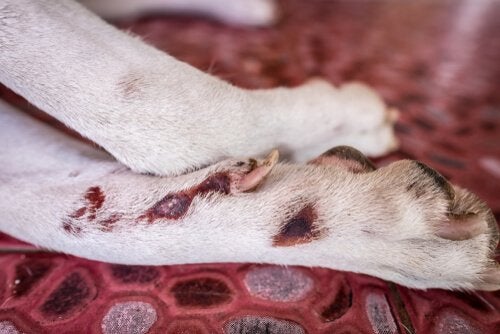 Even though cats are known for constant cleaning themselves, dogs also use their tongues to groom themselves. In some cases, they lick themselves too much or intensely they get acral lick dermatitis. In this article, you can read about this condition and learn how to treat it.

What is acral lick dermatitis?

Also known as acral lick furunculosis or lick granuloma, this chronic disease is mostly caused by dogs constantly licking a specific area of their body. This constant licking doesn’t allow their wounds to heal completely, which in turn gets worse over time.

Usually, acral lick dermatitis appears due to a bacterial or fungal infection, an allergy, a cut, or a rash from an insect bite. In some cases, this disease appears due to boredom or the dog having behavior problems. This results to the dog licking a specific area non-stop, mainly the front legs.

When the wound bothers the dog, the first thing they will do is try to heal and clean it themselves with their saliva. This action becomes a problem when it develops into a compulsive behavior, which is detrimental to their health.

The cycle seems to have no end because the animal feels relief when licking. They feel the need to do it again when the itching, pain and other symptoms return. This repetitive behavior becomes acral dermatitis, a much more serious infection than the first one.

While any dog can have this problem when it’s under a lot of stress (which is quite common in shelters), some breeds are more prone to acral lick dermatitis than others. Among them are Labrador Retrievers, German Shepherds, Neapolitan Mastiffs, Golden Retrievers, Doberman Pinschers, Great Danes, and Spanish Mastiffs.

How to identify acral lick dermatitis

Acral lick dermatitis isn’t hard to detect. First, you’ll see the dog continually licking or biting a specific part of their body. Secondly, there will be wounds, hair loss, ulcers, inflammation, sores, bleeding, or yellow secretions. The can also have a foul smell and look terrible.

If your pet has any of these problems, it’s very important to take them to a veterinarian for a proper diagnosis. Sometimes, at first glance, it might look like acral lick dermatitis, but in reality, it’s a parasitic infection or a wound.

If the vet confirms that it’s this disease, the next step will be to identify what has caused it. That way it can be treated and cured properly. First, the vet will give the animal an antibiotic to reduce the symptoms that cause them to lick or bite the area, and allow it to heal. He/she may also apply creams or other topical treatments.

To keep dogs from biting themselves, they’ll have to wear an Elizabethan collar, although the area can also be bandaged, which must be supervised by the owner. Changing the gauze or bandages will be a challenge, but you must do it as often as the veterinarian instructs.

When acral lick dermatitis appears because in dogs due to behavioral problems, the family should take them out for more walks, play and attention to them more often. That’s a good way to reduce their anxiety and stress and prevent them from harming their own body.

A healthy, calm environment is crucial for your dog to recover and prevent them from getting this condition again. If the acral dermatitis was caused by parasites or bacteria, good hygiene is essential.

You should keep in mind that acral lick dermatitis isn’t a serious problem if it’s detected and treated in time. However, the most important thing is to keep it from happening again in the future. That’s why detecting what caused it is fundamental, beyond the treatment itself.