This serious parasitical disease, also known as heartworm, can be fatal for dogs. Fortunately, today the cure is 95% effective. 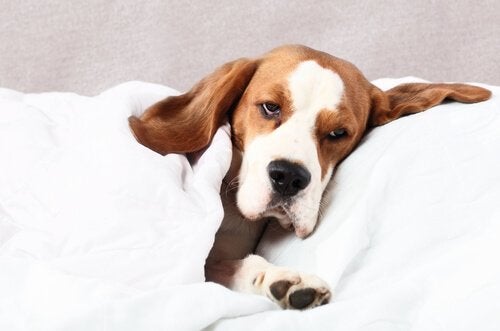 You may have heard about canine filariasis, but do you know what actually causes it? In today’s article, you can find out about everything you need to know about this disease that can affect your pets. Continue reading to find out what it is, how to diagnose and treat it.

What is canine filariasis?

The scientific name of the parasite that causes this disease is Dirofilaria immitis. Its effects should not be underestimated because it’s very serious and potentially deadly.

The parasite itself is a white worm that can grow up to 30 cm long and it affects the hearts and lungs of animals, which is why it’s commonly known as the heartworm.

Dogs can get infected after getting bitten by a mosquito that already has this parasite. Microfilariae develop in the gut of the mosquito and then later get absorbed through the dog’s blood. This parasite doesn’t only infects but other animals as well.

Once the larvae have entered through the bite, they take between 3 to 4 months to develop. The worms reproduce rapidly, which eventually cause blockages in the heart. These blockages make it difficult for the blood flow to reach vital organs, such as the kidneys and liver. This ultimately causes these organs to shut down.

When it comes to puppies, they will only contract this disease if the mother was a carrier. Their worms will be of smaller size and length. However, the puppies can become direct transmitters of the disease.

Each dog can have up to 300 worms in its body. These worms can live inside the dog between five to seven years until they ultimately take the dog’s life by causing a heart attack.

To know if your dog has canine filariasis, you need to know the symptoms and be able to react quickly. However, as mentioned before, the larvae take about four months to develop. It’s not until after six months of being inside the dog that you would begin to notice any symptoms.

After being inside the dog for so long, the dog’s internal organs could already be infected. Therefore,  regular veterinarian appointments are vital for preventing severe complications from canine filariasis because the vet may be able to diagnose the disease earlier.

The following are the most common symptoms:

If you see any of these symptoms in your dog, go immediately to the vet. Acting quickly can save your dog’s life.

How to Diagnose Canine Filariasis

Canine filariasis can be diagnosed through simple tests, such as an x-ray. This allows the veterinarian to see possible abnormalities in the dog’s heart. However, other tests may be necessary, such as blood tests of the ELISA serological test, which is performed with a centrifuge.

A vet would perform an electrocardiogram to track the electrical currents of the heart. As a general rule, this is a very important test because greatly influences the treatment a vet will give to each dog.

Treatment will differ based on every dog. Everything will depend on the condition of the animal, as well as how advanced the disease is. Several decades ago, arsenic was the main component of the medication used to treat canine filariasis. However, the side effects were devastating.

Today, due to the advances in medicine and technology, the medications have changed. Their side effects are almost nonexistent and they have a 95% rate of effectiveness.

The treatment focuses on killing the heartworm. The animal should rest during treatment. If animals don’t move much, this allows the medicine to work and kill the worms. If the animal is active, the worms can move to another part of the body and evade treatment.

We know how much you care about your pet’s health. Seeing them sick can break your heart. However, there is no need to worry so much because even a serious disease like this has a cure.

Link copied!
Interesting Articles
Veterinarian Care
How to Give Medicine to Your Cat